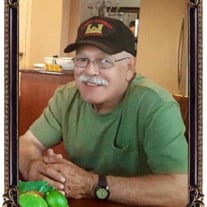 Alvino Lewis Lopez “Jr”, age 75 was called home to our Heavenly Father where he entered into his eternal rest on Wednesday, July 29, 2020 at his home in Elgin, TX. with his family by his side. Jr. was born on October 30, 1944, in Los Fresno, Texas, to Alvino S. and Margarita L. Lopez. He spent his youth growing up in Algoa, TX. and lived most of his life and remaining years with his wife Kathie in Elgin, TX. For 2 years Jr. proudly served in the U.S. Army where he was stationed in Fort Hood, Texas as a Combat Engineer. He was then deployed to Vietnam where he served in the Vietnam War. While there, he earned the Vietnam Service Metal with Bronze Service Star as a Sharp Shooter. He also received the National Defense Service Metal and Republic of Vietnam Campaign Metal before returning home on August 11, 1967. Jr. worked as a mail carrier for the United States Postal Service, leaving them to follow his hearts passion by becoming a Construction Master Carpenter. He loved what he did for a living and continued that line of work as long as his health would allow him. In his spare time Jr. enjoyed doing anything as long as he was doing it with his family, he especially enjoyed fishing, woodcarving, barbequing, digging for arrowheads, listening to his music, working in the yard, just about anything having to do with nature and the outdoors as well as spending time visiting and chatting with friends and family on his patio. Jr. had an immeasurable love for his two fur babies, Sparky and Baby and if you knew him, you knew he was never without them. Jr. was a devoted husband and loving father. He and Kathie were married for over 35 years. Jr is preceded in death by: his father, Alvino Lopez Sr., his brother Abel (Cookie) Lopez and niece Jean Ayers. Left to celebrate his life are his mother, Margarita L. Lopez; wife, Kathie Lopez; sons, Joseph (Fred) Lopez and wife, April, Michael Lopez and his fiancé Summer Bishop; brothers, Arnulfo Lopez and wife Laurainda, Adolfo Lopez and wife Marylou; sisters, Aurora Gonzales, Adela Flores and husband Rudy, Alma Waldrop and husband Garland; grandchildren, Mikel and Marcus Lopez, Jaden, Lauren and Katelyn Lopez; step-grandchildren, Emily (Emilia) Herman, Joel and Jayden Driver and Megan Bishop; great-grandchildren, Eden, Delilah, Stella, Blair and numerous nieces and nephews. There will be a memorial service with military honors celebrating Alvinos’ life on September 25, 2020 at 3:00pm at The Houston National Cemetery, 10410 Veterans Memorial Dr. Houston, Texas 77038

The family of Alvino Lewis Lopez Jr. created this Life Tributes page to make it easy to share your memories.

Send flowers to the Lopez family.