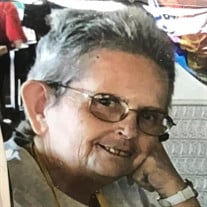 Angela Faye Porfirio, age 72 passed away on Thursday, April 21, 2022. Angela was born in Austin, Texas on 3-29-1950, to the late Pearl and Angelo Porfirio. Angela was their fifth child and attended St. Mary's elementary and left school in the 7th grade to work at her fathers' employer Independent Oil to help with family expenses. She finished her career with Wayne-Dresser- until poor health led to her living on disability. Angela enjoyed sports and exceled at fast pitch softball. A great competitor and was willing to take on challenges. Angela loved the Texas Longhorns and cried with joy and disappointment if they did not prevail. Angela saved the Longhorn's Women's 1986 National Championship newspaper as well as The First Hundred years of UT Football.in the Austin Statesmen in 1992. Angela loved spending time with family and friends. We shared many family reunions including joint ones with the Ruiz family over the years. Although she limited in her travel she kept up closely with her nephews and nieces play their baseball, soccer, football and would tell anyone how good they were. or sports. She loved traveling to West Texas and believed in Marfa lights and made a trip or tow to Binghampton NY. to visit friends there Angela has many friends (Dave, Nancy, Marsha, Patricia, Rudy etc. etc.) at RBJ where she lived for the past 8 years. She was truly special to her friends there and especially enjoyed her writing group. She wrote a great deal and some of her works were published. Writing for her was an outlet for thoughts she didn't share or just wanted to put down on paper to better share what she felt. She was a member and supporter of The Badger Dogs, as well as being a part of BASTA. Angela was known for sharing a meal, some conversation and an occasional tantrum, who doesn't. She loved conversations with Dave, Marsha and neighbors Patricia and Nancy who was a great help to her. Those mentioned are just a few who we know cared and helped her during her physical struggles of the past few years. Angela shared this conversational tone with many of her nieces and nephews, it was kind a her thing...she loved her nieces and nephews and great nieces and nephews. Santo was blessed to have had a Great Nephew named after him, Jeremiah Santo Jett, born 8-1-1981 he passed on 10-17-1981. Angela was preceded in death by her parents, Angelo and Pearl Porfirio; brother Charles Angelo Porfirio Jr and his wife Lois; sister Patricia Nassour and husband Johnny Nassour, brother Santo Porfirio & brother in law Michael Gibbs; Also, nephews Matthew Taylor; George French; and great nephews Christopher Porter; Jeremiah Santo Jett. She is survived by sisters, Ruth Gibbs of Independence Missouri, Mary Taylor and husband David of Pflugerville; brother Vance Porfirio and wife Annette of Clear Lake Texas. She is also survived nephews Michael Angelo Porfirio and his wife Brenda and their daughter Alicia; George Nassour and his wife Sheena, George's son Michael of Pearland; Robert Nassour his wife Keahna his children Anthony wife Jessica and daughter Destiny; daughter Kaia of Austin; Shawn Gibbs of Independence Missouri; Nieces Cynthia Jett, her kids Misty, Noah, Caleb, Elijah, Christopher, Gabriel; Son Joshua, daughter Krysten her son Garret.; Niece Vickie Porter French, children Stephanie her son Jaden; son Nicholas Porter all of Independence Missouri; Lynn Marie Porfirio, sons Archer and Chance of Friendswood; Julie Shuford, husband Robert, son Matthew, daughter Charlotte of Houston. Nephews Angelo Joseph Porfirio, wife Jessica sons, William, Caleb, and Leo of Thompson Station, Tennessee ; Paul Porfirio daughter Madeline and Kyle of Houston; Richard Porfirio of White Sulphur Springs, West Virginia. A very special thank you to our Nephew Robert for all his Love and being there for us! Finally, but by no means the least St. David's Staff, especially Dr. Cardenas, who so compassionately cared for her and guided us through a trying time, he will always be her NBF. Imagine your doctor, who is the St David's Medical Center Director, fulfilling her request for some ice cream by going the dining hall and bringing it to her personally, special! A truly caring group of professionals who showered kindness and care on Angela and her family. Since Angela's brother, Santo, passed away shortly before her a joint Funeral Mass and Celebration of their lives will be held at: St Elizabeth of Hungary Catholic Church Father Juan-Carlos, Presiding Tuesday, May 17, 2022, 3:00 PM CDT 1520 North Railroad Ave. Pflugerville, Texas 78660

Angela Faye Porfirio, age 72 passed away on Thursday, April 21, 2022. Angela was born in Austin, Texas on 3-29-1950, to the late Pearl and Angelo Porfirio. Angela was their fifth child and attended St. Mary's elementary and left school in the... View Obituary & Service Information

The family of Angela Faye Porfirio created this Life Tributes page to make it easy to share your memories.

Send flowers to the Porfirio family.