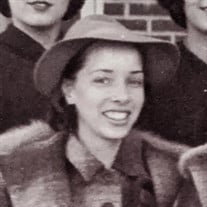 Ann Irene Westerfield, age 101, passed away May 25 at her home in Killeen. (Many thanks to Baylor Scott and White Hospice for their invaluable care and support). She was an elementary school teacher, and beginning in 1975 until her retirement in 1987, reading consultant for the KISD elementary schools, working with then superintendent Charles Patterson. A graduate of Baylor University (BA, MA), Ann Irene was the daughter of a Baptist minister, Jesse Rushing, and his wife Lela. She and her twin sister, Flo Overby, played tennis for Waco High School before enrolling in Baylor at the age of 16. At Baylor, they were the first co-presidents of the Texas College Twins Convention, a project of Baylor president Pat Neff. She and Flo were born in Hemphill, TX December 9, 1919 and lived in several Texas towns before the family moved to Waco so that the twins (and their older sister, Reba Robertson) could attend Baylor while living at home. One of her professors, for a Shakespeare class, at Baylor was Dr A.J. Armstrong, who raised the funds for and built Baylor’s Armstrong Browning Library. In 1942, Ann Irene married teacher and coach Joe Westerfield. They had three sons, Gregory Scott, Jon Westy and Paul Douglas. The family moved from Liberty, TX to Killeen in 1962. She was a lifelong member of First Baptist Church and attended First Baptist Church Killeen, rarely missing a Sunday morning service. During her retirement, she had the (long anticipated and deferred) opportunity to travel to several places she’d always wanted to see, including Israel, London, Wimbledon and, with Flo, Florence and Rome. She had time to play plenty of golf, tennis and bridge. (She loved playing bridge). She also volunteered at First Baptist Church and the Food Care Center and enjoyed spending time with her grandchildren. She, of course, taught them how to play tennis. And how to read. Ann Irene was loved and respected by all who knew her. She encouraged and inspired all who knew her. That is her legacy. (Actually, only a part of it). She is survived by her two older sons and by three grandchildren, Jonathan Westerfield, Shelley Thomas and Joey Westerfield. A memorial service is being planned for early December.

Ann Irene Westerfield, age 101, passed away May 25 at her home in Killeen. (Many thanks to Baylor Scott and White Hospice for their invaluable care and support). She was an elementary school teacher, and beginning in 1975 until her retirement... View Obituary & Service Information

The family of Ann Irene Westerfield created this Life Tributes page to make it easy to share your memories.

Send flowers to the Westerfield family.