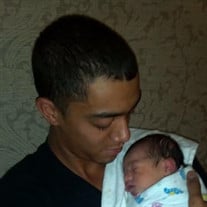 Antonio M. Gillis&#8232;On Sunday, September 2, 2018 Antonio M. Gillis, passed away, at the age of 24, due to injuries sustained in a car accident. His entire family and countless friends will forever remember Antonio. Antonio M. Gillis was... View Obituary & Service Information

The family of Antonio Maurice Gillis created this Life Tributes page to make it easy to share your memories.

Send flowers to the Gillis family.