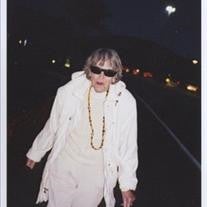 Audrey Nelson Rockwell died peacefully early in the morning January 24, 2013 at Christopher House hospice in Austin, Texas. Born on June 4, 1923, in Geneva, Illinois, Audrey shared a small white clapboard home (built by her uncle) with her parents (Roy G. Nelson and Ann Engstrom Nelson), one brother (Barton) and two sisters (Phyllis and Priscilla). After graduating from high school, she and her friend Margie Giffin moved to the Los Angeles suburb of Montrose where they worked in the World War II defense industry. Audrey loved the California environment and culture. One winter day in beachside restaurant, Audrey and Margie stumbled upon John Wayne and enjoyed a drink and some burgers with him and his future wife Esperanza Baur Diaz. It was in California where Audrey met her future husband, a sailor on leave named Frank Rockwell. She was impressed by his ability to walk out of a bar on his hands. After marriage, Audrey began studying art, first in informal classes at the University of Illinois, and later taking classes at the Art Institute of Chicago. In all aspects of her life and no matter what her circumstances, Audrey expressed a strong sense of aesthetics. Before her divorce from Frank, Audrey gave birth to Brad and Sarah and raised them on the principles of Dr. Benjamin Spock. Being a single parent in that era was not easy. She moved to Batavia, Illinois, and took on a variety of jobs including secretary to a senior executive at Sears and an administrator and counselor for Community Concern for Alcoholism in Elgin Illinois. After health concerns forced her to leave the workplace, Audrey put in many hours doing volunteer work for the blind. Audrey had honesty and integrity and was a person with outspoken views on issues of justice. Increasingly with old age, she confronted bureaucracies and businesses that she believed to be exploitive. At the age of 82 she filed suit against her cell phone company. At trial she represented herself against the company lawyer and won. She was writing letters to elected officials up until her death. After her children left home for college, Audrey moved to the near-north side of Chicago. Suffering from COPD and seeking good fresh air, Audrey later sought refuge in San Diego, California. Her last years were spent in Austin, Texas. Through sheer force of will, Audrey was able to live on her own in her apartment up until a week before her death. Audrey is survived by her sister Priscilla Johnson of Keller, Texas, son Brad Rockwell of Austin, Texas, daughter Sarah Rockwell and son-in-law Lester Joseph of Silver Spring Maryland, four grandchildren Gregg Rockwell, Lillian Rockwell, Andrew Joseph and Alex Joseph, and great-granddaughter Cheyenne Rockwell. In lieu of flowers, Audrey had asked that donations be made to Elder Help of San Diego. www.elderhelpofsandiego.org

The family of Audrey Rockwell created this Life Tributes page to make it easy to share your memories.

Send flowers to the Rockwell family.