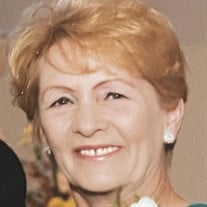 Barbara Searcy, 81, of Leander, TX, died peacefully on September 22nd, 2021. Barb was born on August 21, 1940, in Minnesota to parents Wayne David Tuomie from Squaw Lake, MN and Lila Silva Piri from Menahga, MN. She was the third of four children. She learned Finnish at home from her parents and grandparents. That coupled with being left-handed made beginning school a challenge as the teachers thought she was “slow”. She overcame this and all obstacles throughout her life. At 18, she married John Arthur Lobash and they had 2 children – Lawrence Ted and Sandra Lee Lobash. John was in the army so, during their marriage, they moved around frequently and lived in Kansas, Florida, and Panama. They divorced in 1964. Barb raised Larry and Sandee on her own and worked various jobs to support the family. In 1967 she married John Searcy and together had a daughter Beverly Glen Searcy. They divorced in 1979. In 1991, Sandee gave birth to her son, Timothy Wayne Lobash. Barb and Sandee maintained a home together and jointly raised Tim. In 2000, Larry and his wife, Cathy, welcomed their son, Brannon. In 2003, Barb, Sandee and Larry opened their family business – “Our Daily Bread” — through which they provided school meals for a Lutheran preschool and a private Christian school and served banquets at Saint Martin’s Lutheran Church. Many church members fondly remember her from these times. In 2007, Larry & Cathy welcomed triplet daughters. Six months later, Larry suffered a stroke. Barb stepped up to help with the triplets during Larry’s recovery which lasted over a year. During this time, she taught the girls about God’s love and finding JOY in life. In later years, Barb read The Bible from cover to cover. When she would finish with the Revelation, she would start back at Genesis. Larry & Barb joked that she was “studying for her finals.” She was a life-long Lutheran and regularly attended Good Shephard Lutheran Church in Leander, TX until her strokes. All the grandkids have fond memories of a loving Grandma who would spoil them with candy and ice cream and let them watch cartoons for hours! Barb loved her sweets and was right there enjoying these with the grandkids. In 2017, Barb suffered a series of strokes and declined over the past several years. She is preceded in death by both her parents and her sister, Jan. Her daughter, Sandee passed away 4 days after Barb’s death. She is survived by her brothers Norm (Elsie) Tuomie & Jack (Deanna) Tuomie, her children Larry (Cathy), and Beverly Flegel (Brad) and her grandkids – Tim (30), Brannon (21), and Bryley, Brianna & Brandilynne (14). Throughout her life, Barb loved to dance so we know she passed her final exam with flying colors and is dancing now in Heaven. A Memorial Service was held to honor Barb’s and Sandee’s life at 2:00pm on Friday, Oct. 1st at Saint Martin’s Lutheran Church in downtown Austin. The service was held in the Chapel. Saint Martin Lutheran Church 606 W 15th St, Austin, TX 78701

The family of Barbara Searcy created this Life Tributes page to make it easy to share your memories.

Send flowers to the Searcy family.