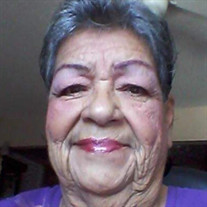 Beatrice (Bea) Hernandez Salazar (71) was born in Austin, TX on October 11, 1950. On the morning of Monday, February 14, 2022, Bea passed away at the Round Rock Medical Center after a series of illnesses. Bea is preceded in death by her father, Juan Garza, mother, Victoria Hernandez, and her older brother, Juan Balderas Jr. Bea is survived by her sons, Paul Pena Jr. (Yvonne), and Luis Miguel Salazar. Brothers; Eduardo Aleman, Jesse Dominguez (Angie), and Charlie Dominguez (Linda). Grandchildren: Antonio Miguel Salazar, Lauren Victoria Salazar, Janiya Rivers, James Rankin, Jonathan Peña, Ashly Morales, Marisa Hernandez, Abraham Hernández, and Isaac Hernandez, as well as numerous nephews and nieces whom she held dearly in her heart. Bea is also survived by her Godson, JJ Compuzano, and God Mother and best friend, Rachel (Manina) Carbajal along with her 10 children whom Bea lovingly referred to as her nephews and nieces. Bea was a feisty yet hilarious, woman with a heart of gold. She enjoyed traveling to Odessa to visit her brother and family. She also enjoyed the many friends whom she claimed as honorary family members. What gave Bea the most joy, however, was her grandchildren. She loved them immensely and would do anything for them. They all made her proud on a daily basis and she never missed an opportunity to share a picture or accolade of them. Bea also loved her best friend and God Mother. Her “Manina.” Not a day went by without talking or texting on the phone, and always made sure to include pictures of the kids and grandkids to one another. She also enjoyed being showered with love from the Palomino family as they all considered her family. Though not by blood, but by love. Her love for them was mutual. Bea retired from the Austin Independent School District’s transportation department where she was employed as a bus driver and monitor for over 30 years. She had fond memories of the students and staff and spoke of them frequently. The family would like to thank the many nurses and staff at Round Rock Medical Center as well as Bea’s niece, Mayra Salazar, who spent numerous hours by her bedside. A viewing will be held on Thursday, February 24th from 5-8pm at King Tears Mortuary located at 1300 E. 12th Austin, Texas 78702. Funeral service will be held at 10am on Friday February 24, 2022, at Cristo Rey Catholic Church located at 2208 E. 2nd Austin, Texas 78702 Masks are required at all indoor facilities.

Beatrice (Bea) Hernandez Salazar (71) was born in Austin, TX on October 11, 1950. On the morning of Monday, February 14, 2022, Bea passed away at the Round Rock Medical Center after a series of illnesses. Bea is preceded in death by her... View Obituary & Service Information

The family of Beatrice Hernandez Salazar created this Life Tributes page to make it easy to share your memories.