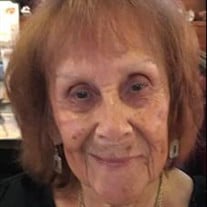 Bertha Carlson Singler passed peacefully on December 13th, 2021. She was born Bertha Rosario Deza on April 6th, 1921, in Lima, Peru. She was known as Mama, Tita, Ms. Carlson, Ms. Singler or just Bertha. At the age of 23 she married Malcolm R. Carlson and moved to the United States. After gaining her citizenship she attended Business school at the University of Texas. She was an amazing seamstress and with 4 daughters this was a huge benefit to her as well as this talent eventually led her to employment at Dillard’s Dept. store where she retired after 27 years. While employed at Dillard’s she was awarded numerous times for high sales. If you wanted to know how something looked on you, she would gladly let you know, so we always said don’t ask if you don’ t really want to know. She also served on the Volunteer Auxiliary at Seton Hospital for many years as well as being a member of the Austin Garden Club for several years in which she received numerous awards for her floral arrangements and designs. On March 16th, 1973, she married Tiney D. Singler and the two of them traveled the world, fished, camped, watched football, baseball and of course dancing. She was preceded in death by her husband Tiney of 33 years, her father German R. Deza and mother Emiliana Quiroz Deza, 4 brothers and 3 sisters. She is survived by her sister Cathy (Chuck), her daughters Myrl, Nora, Gail (Kenny), Teresa 5 grandchildren David (Ann), Michael (Nicki), Jenepher (Chad), Danielle (Chris) Sean, 13 great grandchildren 2 great great grandchildren and numerous nieces and nephews. She was blessed with an amazing loving family and her and Tiney may now Hula Hula through eternity. Viewing will be held on Dec. 21st, 2021, from 5-8 pm at Affordable Funeral Home, 13009 Dessau Rd, Austin, Tx 78754. Private Rosary December 22, 2021, at 11:30- anyone is welcomed to attend if they choose. Funeral Mass will be December 22, 2021 at 12:30-1:30 at St. Joseph Catholic Church, 2903 E Rancier Ave, Killeen, Tx 76543. Graveside Service at Central Texas State Veterans Cemetery at 2:00 pm, 11463 SH 195, Killeen, TX. 76542. Reception Immediately following graveside service at St. Joseph Church Hall.

The family of Bertha R. Singler created this Life Tributes page to make it easy to share your memories.

Send flowers to the Singler family.