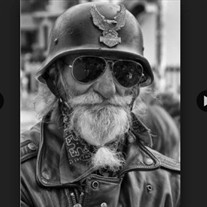 Bill Reese Jr, 75, passed away at his home in Austin, TX on November 3, 2017. Born on December 19, 1941 as the oldest of eleven children to the late Bill Reese and Ava Boone Reese. Bill was survived by his two daughters Maria and Jessica; brothers Carroll, Cecil, Raymond, and Terry; five grandchildren, dozens of nieces and nephews, as well as his special friends Bart and Doris Ann Willis and Darwin Mann. He was preceded in death by his parents, two sisters, and four brothers. Bill served in the US Air Force during the Vietnam Era where he received a Small Arms Expert Ribbon and a National Defense Service Medal. He received an honorable discharge in July 1966. Born in Johnson City, TN where most of his family remain, Bill loved to travel and spent considerable time in Nashville, Miami, Jacksonville, Thailand, Bahamas, US Virgin Islands, and Austin where he spent the majority of the last 21 years. Bill had several careers throughout his life including farming, engineering, veterinarian, and mechanic; but he was most proud of his time with country music notables Willie Nelson, Dolly Parton, Tanya Tucker, and Louise Mandrell. He was also involved with import/export and was an avid collector. Bill is being cremated and a memorial will be held at the home in Austin, TX. His family and friends in TN will gather to say their goodbyes during a private ceremony. Bill’s family has decided to plant his ashes in a living urn designed to grow into a Gingko Biloba memory tree. An homage to his Native American ancestry, like Bill, the deciduous tree will have strong roots in East TN, but the leaves can blow wherever the wind takes him. As an immensely stubborn man, Bill lived his life on his own terms and rarely conformed to societal expectations. However, he loved his family and travels and was known for recounting stories of each of them as well as to anyone who would listen. He truly made a mark on the life of anyone whose path he crossed. Memorial donations may be made in his name to South Side Tattoo 1313 S Congress Ave, Austin, TX 78704 or to the Mountain Home James H Quillen VA Medical Center in Johnson City, TN.

Bill Reese Jr, 75, passed away at his home in Austin, TX on November 3, 2017. Born on December 19, 1941 as the oldest of eleven children to the late Bill Reese and Ava Boone Reese. Bill was survived by his two daughters Maria and Jessica;... View Obituary & Service Information

The family of Bill Reese Jr. created this Life Tributes page to make it easy to share your memories.

Bill Reese Jr, 75, passed away at his home in Austin, TX on November...

Send flowers to the Reese family.