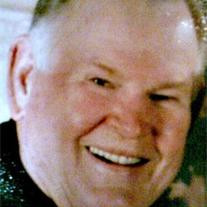 Billy Gene Brinlee passed away at Hospice Austin?s Christopher House on February 7, 2013, surrounded by his faithful wife Judy and family. To his very last breath, he taught those around him lessons in assurance, trust, and surrender. Bill was born February 4, 1940 in Farmersville, Texas. His family moved to Odessa, where he grew up. He was a member of the Church of Christ and graduated from Odessa High School and North Texas State University. Bill was a veteran of the U.S. Army, where he served in Germany. He is survived by his loving wife of ten years, Judy Griggs Brinlee; three sons, Bill Jr. and wife Sabra, Russell, Sean and wife Laura, and step son Sammy and wife Lynn. Brothers R.J. and wife Wanda, Wayne and wife Angela, and Danny and wife Jennifer. There are eight adoring grandchildren and four great grandchildren. Judy?s girls and son in laws were like his own; Gayla and husband Kevin, Gina, and Nicole and husband Michael all loved him dearly. Bill was affiliated with Halliburton and Cameron Oil Companies. He worked all over the world and settled in Katy, where he was active with his boys? sports and Booster Club activities. In recent years he and Judy lived in The Woodlands, where he was a consultant teaching at UT Houston in the oil and gas field. They moved to Austin in June 2012. Bill was an avid golfer his entire life, and has many golf buddies. He leaves behind a legacy of a life well lived, laughter, jokes, and a deep love of God, family,friends, and his dog Levi, who was his constant companion. The family would like to thank the angels at Christopher House and request that in lieu of flowers, contributions be made to that wonderful facility.

Billy Gene Brinlee passed away at Hospice Austin?s Christopher House on February 7, 2013, surrounded by his faithful wife Judy and family. To his very last breath, he taught those around him lessons in assurance, trust, and surrender. Bill... View Obituary & Service Information

The family of Billy Brinlee created this Life Tributes page to make it easy to share your memories.

Send flowers to the Brinlee family.