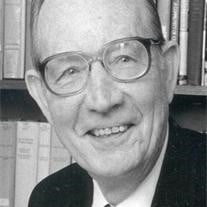 C. Ellis Nelson, 95, died on June 9, 2011, in Austin, Texas. Ellis Nelson?s pioneering research and writing about forming Christian disciples through the life of a congregation, coupled with his deep wisdom, gentle wit, and genuine humility, endeared him to several generations and secured his place in the history of the American Presbyterian Church. The only son of Carl and Elizabeth Nelson of Beaumont, Texas, Nelson married Nancy Gribble in 1941. He earned degrees from Austin College, Austin Presbyterian Theological Seminary, The University of Texas, and Columbia University, and was a research fellow at Oxford University in 1964 and 1972. Nelson was ordained by the Presbyterian Church and served as associate minister for University Presbyterian Church, Austin, and as chaplain to the State School for the Blind. Ellis Nelson?s contributions to church life in the twentieth century are noteworthy. In a career that spanned sixty years, he was a minister, researcher, author, consultant, as well as seminary professor, dean, and president. He began his teaching career at Austin Seminary in 1940. He left in 1957 for New York?s Union Theological Seminary where he was named to the The Skinner and McAlpin Chair of Practical Theology and served as dean. In 1974 he became president of Louisville Presbyterian Seminary and served until he retired. He and Nancy returned to Texas and he became interim president at Austin Seminary where he remained on the faculty until his death. He lectured or taught at many U.S. and foreign seminaries. He also served in the public sector: the Texas Legislative Council, the Fair-Housing Committee in Tenafly, New Jersey; and as a founder of the National Council on Religion and Public Education in New York. Ellis Nelson?s entry in the ?Christian Educators of the 20th Century? says, ?Some writers refer to Nelson and his perspectives along with those of the most significant religious educators of the past two centuries ? Nelson is appreciated, studied, cited, and utilized across the theological, philosophical, and denominational spectra of Christian education.? With a dozen books and monographs and almost ninety articles, chapters, and reviews, Nelson?s work explored themes of conscience, socialization, and the crisis of the church in an increasingly secular culture. He was instrumental in developing the ?Covenant Life? church school curriculum, considered by many to be among the finest written. In appreciation, a grateful church bestowed numerous honors upon him, including honorary degrees from Austin College and Centre College; Austin College?s Distinguished Alumnus Award, Austin Seminary?s Distinguished Service Award; The E.T. Thompson Distinguished Service Award from the Presbyterian Outlook Foundation; Educator of the Year by the Association of Presbyterian Church Educators; The COTE Award for Excellence in Theological Education; and the Austin College James I. McCord Award. The administration building at Louisville Seminary and the education wing at First Presbyterian Church, Austin, where Ellis and Nancy were active participants for 25 years, were named for them. The Nancy Gribble and C. Ellis Nelson Chair in Christian Education at Austin Seminary was established in 2002. He taught, researched, and wrote well into his tenth decade (he published his last book at age 92). To the very end, Ellis Nelson?s meticulous scholarship, steady presence, and ever-present humor made him a trusted advisor and valued friend. He enjoyed working with his hands, and mastered a confectionary hobby to amuse Nancy and delight friends and neighbors. He claimed that a touch of liqueur was the secret ingredient in his exquisite chocolate truffles, but it was more likely the precision with which they were crafted and the devotion with which they were shared. In addition to his beloved wife of seventy years, Nancy, survivors include his son, Ellis Stark, wife, Veronica, and son, Brian; daughter, Karin, husband, John McAnlis, and children, Nancy, Ian, and Carolyn; and sister, Selma. Ellis and Nancy?s daughter, Joy Elizabeth, preceded him in death.

The family of C. Nelson created this Life Tributes page to make it easy to share your memories.

Send flowers to the Nelson family.