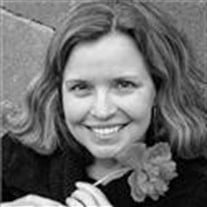 Cecil Elaine Brezina was born to Ernest and Zina Worley, Feb. 26, 1948 on the Pacific island of Guam. She died peacefully in her sleep at Christopher House, in Austin, Texas on Jan. 23, 2015. Cecil graduated from SWT with degrees in English and Psychology. She served as a high school counselor for twenty years in the New Braunfels and Bulverde School Districts. As a counselor, she shared her profound ability to listen, empathize, and comfort students in crisis. After retiring from School Counseling, she opened a private practice in Austin for a number of years. Although Austin was her home for the last 30 years, she spoke fondly of her years in San Marcos and often reminisced about the magical quality of her life there. She especially enjoyed her years working at the Hays County Citizen, a family owned newspaper, where she made many cherished friends. Cecil reflected the artistic attributes of her mother. Though she did drawings and paintings sparingly, her compositions reflected taste, imagination, and balance. Her creativeness was also reflected in the way she designed the interior of her home, which she made a welcome refuge for her husband, their family, and frequent guests. Her impeccable taste allowed her to take ordinary but diverse things and arrange them in a way that created the atmosphere of a cozy bed and breakfast with the intrigue of a museum. Photography, poetry, and song writing were also things that Cecil enjoyed. HalleyAna Finlay, a young Artist from San Marcos, recently recorded one of her songs, which pleased Cecil greatly. Cecil was often the life of a party. When she entered a room, people took notice. She loved to read and it was her nature to have lively chats with almost everyone. To the end, Cecil remained true to her nature, and showed those around her how to die with dignity, poise and a sense of humor. She loved life and is missed deeply by her friends and family. She is survived by her husband, of 30 years, John Brezina, their children, Lyn Brezina, John Brezina, Lara Brezina, and Grace Sullivan, six grandchildren, and her three Worley siblings Lee, Seth, and Robin. A memorial celebration service will be held at Hope Chapel, 6701 Arroyo Seco, Austin, Texas on Saturday, January 31, 2015 at 4:00 p.m. In lieu of flowers, memorial contributions may be made to Hospice Austin.

Cecil Elaine Brezina was born to Ernest and Zina Worley, Feb. 26, 1948 on the Pacific island of Guam. She died peacefully in her sleep at Christopher House, in Austin, Texas on Jan. 23, 2015. Cecil graduated from SWT with degrees in English... View Obituary & Service Information

The family of Cecil Elaine Brezina created this Life Tributes page to make it easy to share your memories.

Send flowers to the Brezina family.