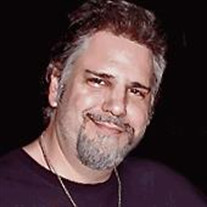 Charles (Charlie) Vincent Gouveia, 60, passed away peacefully March 16, 2022, after a lengthy battle with frontotemporal degeneration (FTD). He was born January 9, 1962, in Redwood City, California, and grew up loving photography and music, leading him to work as a photographer, personal assistant, and tour manager for several prominent touring artists in the ‘80s through the early ‘00s. His late maternal grandfather, George Tyler, was a rancher in Mason County, so between that and music, Charlie grew up eager to come to Texas. In 1998 he moved from Santa Cruz, California to Austin, Texas, as road manager for an artist based there. He soon met a graphic designer on a local music project, and they married in August 2001. In 2005, he parlayed his touring and management skills into logistics for Apple Computer. Charlie continued to support and enjoy live music here and in his “soul hometowns” of New Orleans and Lafayette, Louisiana, and Macon, Georgia, as long as he could. He was also very proud to have some of his photography appear in Ken Burns’s “Country Music: An Illustrated History,” “Tales from the Tour Bus,” and various websites, merchandise, and press materials over the years. He is survived by his wife, Lisa Gouveia, of Austin; son, Samuel Tyler Ryan Gouveia, of Santa Cruz, California; dozens of relatives in the Bay Area, northwest Washington, and Hawaii; many, many friends around the world; and his beloved cats Miles and Widget. He is preceded by most of his favorite musicians and by his father, Francis V. Gouveia, and grandfather, Manuel Gouveia, who both taught him to stay cool and strong in the face of anything and to take pride in his Portuguese and Hawaiian roots. Charlie adamantly did not want a traditional funeral. He insisted on an informal gathering where people can listen to his favorite music and tell funny stories about him. And, yes, of course he left a carefully curated playlist for it. Plans are underway for that gathering. In lieu of flowers, Charlie and Lisa ask to consider donating to TheAFTD.org or to Hospice Austin Christopher House. They would especially like to thank Hospice Austin, Lori Ray Tripp, Martin Guillot, Deb Austin, and the FTD North Austin Support Group for all their love and invaluable support. We are heartbroken but Charlie is now free, and as his favorite Allman Brothers song says: “The road goes on forever…”

The family of Charles Vincent Gouveia created this Life Tributes page to make it easy to share your memories.

Send flowers to the Gouveia family.