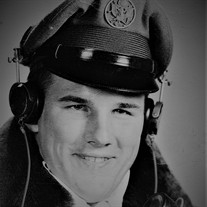 Clyde (Mac) Reginald MacGibbon November 10, 1936-June 11, 2019 The Lord opened his arms for Clyde on Tuesday June 11, 2019 after years of staying positive and never giving up. Clyde was born in Walton, New York, the youngest of 10 children. Clyde graduated from Walton Central School in 1954, he was called “carefree, robust, manly, and gallant” in his HS annual. He played basketball, football, baseball and track. He joined the Air Force at the age of 18, and traveled all around the world. His service honors include Air Force Commendation Medal, Air Force Good Conduct Medal, Air Force Longevity Medal. Clyde played football, basketball and fast pitch softball for the Air Force making the Armed Forces Clark Dream Team in 1960 for football. He was a great athlete and his love for sports carried on through the years, he was always enthusiastic about watching his children, grandchildren and great grandchildren play anything as often as he could. Clyde married Jacquelyn Carroll on June 5, 1963 after meeting her and Kim on a blind date in Monahans, Texas. Michael was born in 1965. Clyde was a member of the Grand Lodge of Massachusetts and was a Master Mason for 59 years. Clyde retired from the Air Force in 1974 after serving 20 years. Clyde went to TSTI in Waco Texas after retirement in auto mechanics. And after graduating had a small business at home fixing anything that needed fixing. In 1983 Jacquie and Clyde moved to Fort Worth and he worked as a handyman for The Goodrich Center For The Deaf for several years. He retired from GFCD and moved to China Spring, TX, where he built a home and enjoyed spending time with his family. He later moved to Briarcliff to be near his son. His hobbies included watching his grandkids and great grandkids play any sports, riding around in his golf cart, playing video games, taking a nap, and he loved his cats. He was loved for his unusual sense of humor, practical jokes, honesty, integrity, perseverance, big grin, and always saying “I Love You”. Clyde is preceded in death by his mother and father Donald and Maude MacGibbon, his brothers Richard, Glenn, Raymond, John, Robert and Gerald, sisters Janet Fletcher and Jean Musson. He is survived by sister Alta Holley, daughter Kim Conn and husband Hugh, son Michael MacGibbon and wife Monica, 5 grandchildren Ashley Jackson, Justin MacGibbon and wife Ashlee, TJ Green and wife Courtney, Ryan MacGibbon and wife Lauren, Dustin Green, 6 great grandchildren Jason Jackson Jr., J’Ley Jackson, Maisee MacGibbon, Reece MacGibbon, Rylee MacGibbon and Owen MacGibbon. He is also survived by many sister-in-laws, nieces and nephews. A military service will be held on Monday, July 15th, at 1:45 pm at the Central Texas State Veterans Cemetery in Killeen, Texas. In lieu of flowers donations can be made to Down Syndrome Association of Central Texas at dsact.org

Clyde (Mac) Reginald MacGibbon November 10, 1936-June 11, 2019 The Lord opened his arms for Clyde on Tuesday June 11, 2019 after years of staying positive and never giving up. Clyde was born in Walton, New York, the youngest of 10 children.... View Obituary & Service Information

The family of Clyde Reginald MacGibbon created this Life Tributes page to make it easy to share your memories.

Send flowers to the MacGibbon family.