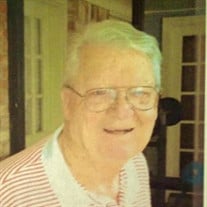 Collie C. Moye Jr. passed away peacefully, on April 20, 2015, in Bastrop, Texas. Collie was born March 1, 1926, to Collie C. Moye Sr. and Edith Hurst Moye, in Longview, Texas. He and his older sister, Grace, were raised by his mother, in Amarillo, Texas. He joined the US Navy, upon graduation from high school, where he was a Radarman, 3rd class, on the USS Kittyhawk. After the war, he lived in Houston, Texas, where he began his long career with Commercial Credit Corp. He met and married Hazel Devini Moye, a schoolteacher. Shortly after their marriage, Commercial Credit sent him to the great unknown, the RGV, where it was love at first sight. Collie and Hazel bought their first home and raised a family. Collie very much enjoyed his life in the valley, his family and his many friends. He was active with his wife's sorority, Beta Sigma Phi. He played golf any chance he got. He taught his children how to fish and took them on many camping adventures. He was active with the Spirit of Peace Lutheran Church. He loved grilling, sweets, music and any and all sports on TV. He was adored by many for his wry sense of humor, his easygoing ways and his generosity. His grandchildren were the light of his life, and he indulged them whenever he could. He never made an enemy. After Hazel died, he moved to Bastrop to be closer to family. He is survived by his daughter, Lisa Picciandra and husband Michael, his son Collie Moye III and wife Katie. His grandchildren, Georgia and Zoe Picciandra and Aidan and Wyatt Moye. He is also survived by numerous nieces and nephews, great nieces and nephews and countless lifelong friends, who he loved dearly.  His ashes will be interred at the RGV Veteran's Cemetery, with a memorial to be announced.

Collie C. Moye Jr. passed away peacefully, on April 20, 2015, in Bastrop, Texas. Collie was born March 1, 1926, to Collie C. Moye Sr. and Edith Hurst Moye, in Longview, Texas. He and his older sister, Grace, were raised by his mother, in Amarillo,... View Obituary & Service Information

The family of Collie C. Moye Jr. created this Life Tributes page to make it easy to share your memories.

Send flowers to the Moye family.