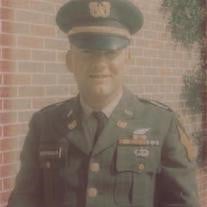 Daniel Raymond Stephenson, 73, of Austin, TX, passed away June 1, 2011. He was born in Tacoma, WA in 1938, to parents, Sumter and Lillian Stephenson. Daniel grew up in Enumclaw, Washington and graduated from Enumclaw High School. After high school, he joined the United States Army and performed Morse Code signals interception in Vietnam, Japan and England, before joining the 10th Special Forces Group in Bad Tölz, Germany. Subsequently, he trained as a helicopter pilot and served a second tour in Vietnam, where he was awarded a Bronze Star for bravery for a helicopter evacuation of wounded under mortar fire. Later in life, he sponsored a Vietnamese family to immigrate to the United States. Daniel was married to the late Susan at The Little Chapel-in-the-Woods in Denton, TX on June 11, 1970. Daniel and Susan and their newborn son lived in Darmstadt, Germany, and then Alaska and Colorado, where Daniel retired from the Army after a 20 year career. Daniel settled in Lafayette, LA, with his wife, son, and newborn daughter, and flew helicopters for Petroleum Helicopters Inc. (PHI) for 20 years. He was recognized for excellence in safety at PHI after having safely landed his helicopter on autorotation after engine trouble. He enjoyed watching history shows, doing the crossword with his beloved wife, and spoiling his family. He loved and worked hard for his family. He had a goofy side, and was great and strong, and just knew when to simply be his children's Dad, even after his stroke in 2009. He is survived by his son Daniel A. Stephenson of Grand Prairie, TX; daughter Emily Long and son-in-law Douglas Long of Austin, TX; grandchildren Lillian and Dylan Long of Austin ,TX; Brother, Ronald Stephenson of Naches, WA; Sister, Kathy Anderson of Burien, WA; his ever-faithful dog Renny. Thank you to all the Doctors, Nurses and CNAs that kept our Dad going for so long. In lieu of flowers, the family is requesting that donations be made out to: American Heart Association: HYPERLINK "http://www.heart.org/HEARTORG/Giving/Giving_UCM_001137_SubHomePage.jsp" http://www.heart.org/HEARTORG/Giving/Giving_UCM_001137_SubHomePage.jsp. The Little Chapel-in-the-Woods Restoration Campaign: HYPERLINK "http://www.twu.edu/downloads/institutional-development/ChapelBro.pdf" http://www.twu.edu/downloads/institutional-development/ChapelBro.pdf He is predeceased by his brothers Richard Stephenson, Gordon Stephenson and Donald Stephenson. Memorial Service: Date and Time: TBA Place: Grove Hill Memorial Park 4118 Samuell Blvd, Dallas, TX 75228-6708 PH: 214-381-7118 Web map to Cemetery link: HYPERLINK "http://www.grovehillmemorial.com/dm20/en_US/locations/09/0988/directions.page?" http://www.grovehillmemorial.com/dm20/en_US/locations/09/0988/directions.page?

Daniel Raymond Stephenson, 73, of Austin, TX, passed away June 1, 2011. He was born in Tacoma, WA in 1938, to parents, Sumter and Lillian Stephenson. Daniel grew up in Enumclaw, Washington and graduated from Enumclaw High School. After high... View Obituary & Service Information

The family of Daniel Stephenson created this Life Tributes page to make it easy to share your memories.

Send flowers to the Stephenson family.