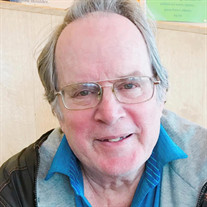 David Gates Caldwell, of Austin, TX, passed away quickly and unexpectedly Saturday, April 10, 2021. Born in Memphis, TN in 1951, David grew up with his three brothers and sister, often leading them in various sports, games and general competition. He attended White Station High School where he played on the basketball team. He did his undergrad at Vanderbilt, receiving a mathematical engineering degree. He came to Austin to study law at the University of Texas, graduating in 1976, and becoming a devoted UT fan. It was here he met his wife Marcia and in the pursuit of a mathematical, sports inclined son, had three artistic, wordy daughters. While David was raised in the Jewish faith, his true devotional practice was on the playing field - whether that was a basketball or tennis court, softball field, golf course, bowling alley, poker or bridge table, family board game, or watching hours and hours of sports on TV. A natural athlete with a fierce sense of competition, losing to David was an experience shared by most who knew him. He was dedicated to beating any opponent, even if they were smaller, younger, and / or his own daughter. David was perhaps not the most gracious winner, but he was always quick to offer advice to his opponent on how to improve (with the reception depending on how closely one was related to him). Helping others was one of David’s driving traits, and influenced every area of his life. David had a brilliant and logical mind, a charismatic and welcoming personality, and a boisterous and teasing sense of humor. He struggled for several years with his mental health, but the last decade+ of his life was defined by his commitment to its management, and the relationships he rebuilt serve as a testament to this. David is survived by those three daughters, Katie Caldwell (Alex Karlo), Kim Caldwell (Justin Dove), and Courtney (David) Hunt; three granddaughters (Allison and Edie Dove, Ellie Hunt); his brothers Jerry (Debbie), Chris (Cheryl), and Felix Caldwell (Greg Reese); sister Helen (David) Sain, and former wife Marcia Caldwell. He is preceded in death by his parents, Jerome and Allete Caldwell. To honor David’s life, you could donate to Family Eldercare, the Boys & Girls Clubs of the Austin Area, or Texas RioGrande Legal Aid. But if you REALLY want to honor David’s life - tell a stranger a sports fact, win at a sport or game, push an unsuspecting child into a pool, record over home videos with golf, slip your daughter a crisp $20, eat a Hostess cupcake, or most importantly - help out someone who really needs it.

The family of David Gates Caldwell created this Life Tributes page to make it easy to share your memories.

David Gates Caldwell, of Austin, TX, passed away quickly and...

Send flowers to the Caldwell family.