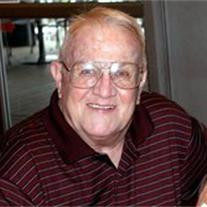 David Leslie Pollard October 14, 1938 ? May 12, 2011 David L. Pollard of Austin passed away on Thursday morning May 12, 2011. He was born October 14, 1938 in Dallas to Les and Ann Pollard. Soon after his birth, the family moved to Austin, where he spent the majority of his life. As a child and teenager, he was passionate for athletics. Football was his first love in which he excelled. It wasn?t just the game that he loved, but the people he was honored to share the time with that made it truly special. He starred at Austin High School as a Fullback, Halfback, and Punter and received All-District and All-State Honors as a senior in 1956. His teammates that he shared a special bond until passing include Mack Breedlove and Alton Greeven. His Quarterback and good friend John Babcock preceded him in death. Following graduation from Stephen F. Austin High School, David made a decision to enter the Army National Guard and served at Ft. Bliss in El Paso, Texas. He then enrolled at the University of Texas studying Business and joining Phi Gamma Delta Fraternity. Upon graduation from Texas he married his college sweetheart, Ruth Elizabeth Day of Houston. He accepted a position in banking at Republic National Bank in Dallas before coming home to Austin to help his dad run the family finance business. Years later, he opened Champions Men?s Clothing. Following the closing of Champions he worked in several business ventures prior to retirement. His family was his passion and he dearly loved his daughter Laura Elizabeth Pollard, his son David Bradley Pollard, his sisters Gretchen Pollard Richardson of Crane, Texas, and Judy Pollard Weatherford Freeman of Dallas, and his many cousins, nephews, and nieces in Lubbock, Dallas, and throughout Florida. No one seemed to make him happier than his three beautiful grandchildren Blake Miller Pollard (11yrs), and twins (5yrs) Hudson Bradley Pollard, and Emersen Kaye Pollard. He lived for those moments with them and they dearly loved their Grandad. David enjoyed his last years of life working at Hardin House, a private freshman women?s dormitory at the University of Texas. He also loved gathering with his coffee group called the AHS Klatsch Group, which is made up of graduates of Austin High Class of ?56 that meet every Thursday. In addition, he enjoyed anytime he could spend with family and friends. He loved drinking coffee and eating dinner with his daughter Laura and looked forward to his visits down to Cypress, TX to see his son Brad, daughter-in-law Dallas and three grandchildren to enjoy some home cooking. He was thrilled any chance he had to watch his grandson?s sports activities and get big hugs from his granddaughter, Emersen. For those that knew David, you would know that he loved the Longhorns, lived for watching golf and college football, loved to chat, and never met a stranger. There will be a celebration of his life for friends and family on Saturday May 21, 2011 from 4-6 pm at Central Market at 4001 N. Lamar in Austin. The family asks that instead of flowers that donations be made to the Stephen F. Austin High School Continuing Education Foundation http://www.austinhighfoundation.org/donate.html or to Hardin House, David Pollard Memorial at 2206 Rio Grande, Austin TX 78705-5130, [email protected]

The family of David Pollard created this Life Tributes page to make it easy to share your memories.

Send flowers to the Pollard family.