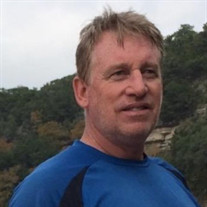 In memory of David (Dave) Albert Rothenbury, October 17, 1964 – April 25, 2020 It is with unspeakable sadness that we mourn the loss of David Albert Rothenbury, in his 56th year. Dave spent his early years in Sarnia, ON attending Central and Northern Collegiates. He was well known on the Sarnia high school sports scene and was awarded Athlete of the Year twice while attending Northern. Dave excelled at football, basketball, rugby and held the SWOSA record for discus throwing for many, many years eventually handing it off to an athlete who would go on to compete in the International Olympics. He played competitive rugby in Sarnia and Ottawa and represented Eastern Ontario. His Sarnia friends will fondly remember him by his nickname ‘Rocko’ and endearingly called him a ‘gentle giant’. In later years he competed in many Masters tournaments for the throwing events in Texas and other states. He also coached up and coming young athletes. Dave obtained his P. Eng in Mechanical Engineering after attending Algonquin College in Ottawa, ON and then completing his degree at Lakehead University in Thunder Bay, ON. Dave’s first career work was at the Bank of Canada in Ottawa, ON developing the newest anti counterfeit technology for Canadian currency. He was soon recruited by Texas Instruments in Dallas, TX. where he relocated and started a new and exciting career in the upcoming semi conductor industry. He met and married his best friend Beth Morgenroth and together they were raising their two sons Casey and Zach, living in Cedar Park, TX, a part of the Austin metropolitan area. Dave will always be remembered for his quick easy wit and humour, his gentle and patient fathering of his much loved sons Casey and Zach, his logical intelligence, and his superb athleticism. He is will be so sadly missed by his young sons Casey Cole and Zach Lane Rothenbury, his former wife and best friend Beth, his brother Dan and his wife Gourete and their four children, his Mom and Dad Marlene and Ray Rothenbury, his Aunt Kathryn Sullivan, uncle Bob and wife Leesa Sullivan, brothers’- in - law Kenneth and his wife Susie, Douglas and his wife Theresa Morgenroth and the many nieces and nephews living in the San Antonia, TX area, plus the many friends made through the years in Sarnia, Thunderbay and Ottawa, ON and Texas. Condolences may be expressed to the family through www.centraltexascremation.com and if you chose, donations to the charity of your choice. A Poem to my Sons Speak of me as you have always done. Remember the good times, laughter and fun. Share the happy memories we’ve made. Do not let them wither and fade. I’ll be with you in the summer’s sun, And when the winter’s chill has come. I’ll be the voice that whispers in the breeze. I’m peaceful now, put your mind at ease. I’ve rested my eyes and gone to sleep. But memories we’ve shared are yours to keep. Sometimes our final days may be a test, But remember me when I was at my best. Although things may not be the same, Don’t be afraid to use my name. Let your sorrow last for just a little while. Comfort each other and try to smile. I’ve lived a life filled with joy and fun. Live on now, make me proud of what you’ve become. Author, Anthony Dawson

In memory of David (Dave) Albert Rothenbury, October 17, 1964 &#8211; April 25, 2020 It is with unspeakable sadness that we mourn the loss of David Albert Rothenbury, in his 56th year. Dave spent his early years in Sarnia, ON attending Central... View Obituary & Service Information

The family of David Albert Rothenbury created this Life Tributes page to make it easy to share your memories.

Send flowers to the Rothenbury family.