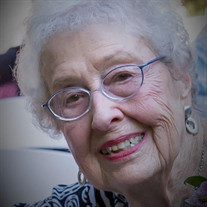 Donna Faye Hotek Tankersley December 24, 1924 -January 16, 2020 Donna F. Tankersley age 95 passed away peacefully surrounded by loving family at Austin Hospice’s Christopher House to the sound of a harp being played calling her home. A Memorial Celebration of her life will be held Saturday, January 20th, 2020, with family receiving friends at a 1:00 pm reception at Faith United Church of Christ in Bryan, Texas. Donna was born and raised on her family farm in Otho, Iowa to father Vencil Joseph Hotek and mother Mary Tilton. She lived most of her life in various states including Shreveport, Louisiana where she worked until her retirement for Alexander and Alexander Insurance, Co., as a manager in their property and casualty division. She married Edward “Ned” Tankersley, Jr. on February 18th, 1989, eventually settling in Bryan, Texas. She lived there until November 2018 when she moved to Austin, TX to live in a memory care facility for Alzheimer’s. She was proceeded in death by husband Ned Tankersley, former husband Richard Stalnaker, daughter Laura Stalnaker Lewis, granddaughter Amanda Collins, sisters Eva Lou Strutzenberg, Bonnie Jean Schill, and nephew, Douglas Shill. Survivors include stepdaughter Laura E. Tankersley and her wife Donna L. Troy-Tankersley, grandchildren Eric O’Brien, Samantha Lewis Flores, Gabriel Glenn, Jacob Glenn, 6 great grandchildren, a niece and several nephews and great nieces and nephews. Memorials in her honor can be made to the Alzheimer’s Association, her church: Faith United Church of Christ or a charity of your choosing.

The family of Donna Faye Tankersley created this Life Tributes page to make it easy to share your memories.

Send flowers to the Tankersley family.