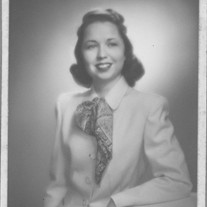 Dorothy Louise McCormick Dorothy Louise McCormick passed away peacefully on April 25th, 2014. She was born on November 2, 1925, in Rosenberg, Texas, to parents George Ransom Huntington and Mary Briscoe Huntington. Dorothy graduated from Rosenberg High School in 1942. She entered the University of Texas at Austin in 1942 and graduated with high honors in 1945 with a Bachelor of Journalism. She continued her education, earning a Master of Science in Journalism degree from Columbia University in New York in 1947. Dorothy married James Harvey “Mack” McCormick on December 31, 1948, in Rosenberg, and lived for a short time in Wilmington, Delaware, before divorcing and returning to Texas. She retired from McCann Erickson in 1983 after a long and rewarding career in advertising. Dorothy then devoted her time to volunteering at the MD Anderson Hospital in Houston, where she accumulated more than 7,000 hours of service. She was awarded the Texas Medical Center “Volunteer of the Year” by MD Anderson in 1997, and that year her picture graced the MD Anderson “Become a Volunteer” campaign by appearing on the Houston Metro buses and bus stops. Known affectionately as “Sis” for “Little Sister” by her siblings, she kept the nickname “Cissy” in her adult years. Cissy was a devoted daughter and sister, and was a beloved aunt to her nieces and nephews. She left her long-time home in Houston to move to Austin, Texas, in 2001, where she lived until her death. Dorothy was preceded in death by her parents, her sister Mary Ruth Vaught, her brothers James Marion Huntington and George Ransom Huntington, Jr., and her niece Susan Vaught Shirley. She is survived by her sister-in-law Evelyn Miller Huntington, her nephews George Mason Vaught, James Arthur Vaught, and George Robert Huntington, of Austin, and her nieces Mary Claire Huntington of Rosenberg and Georgie Huntington Zaidi, of Camarillo, California.

The family of Dorothy Louise McCormick created this Life Tributes page to make it easy to share your memories.

Send flowers to the McCormick family.