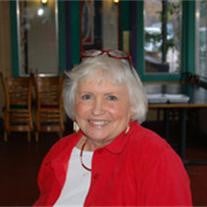 Dottye Dean, of Austin Texas, died Friday evening, April 22, at Christopher House at the conclusion of a private struggle with illness. Born in Huntsville, Texas, September 13, 1938, Dottye traveled as a high school student to support southern integration in 1957 and to England in 1958 to help their continued recovery from the devastation of WWII. From her young travels she saw a wider world than was available to her in 1950?s east Texas, and so struck out for the University of California, Berkeley in 1960. In the San Francisco Bay Area she found lifelong friendships, and spent the next 33 years discovering, following, and creating a world of change, feminist empowerment, and loving possibility. Dottye married Terence Dean in 1961 and gave birth to 3 children in succession, Kathryn in 1961, Mark in 1963, and Michael in 1966. Dottye was a devoted mother whose first career was as the entrepreneurial proprietor of a daycare center she ran from her home, enabling her to work while staying at home with her young children. She remained intensely involved in her children's lives, saying often that her role as a mother was the most important accomplishment of her life. Dottye returned to Cal Berkeley to graduate with a degree in English in 1970; divorced that year as well, Dottye originated the position of classroom Music Specialist for the San Francisco Unified School District, including publishing a resource book for teachers on creating and integrating live music in curriculum, as well as being a founding member of San Francisco?s Alvarado Art Project, a parent teacher organization committed to bringing art to neighborhood school classrooms and grounds. When Dottye was laid off in 1979 from the S.F.U.S.D. as a result of budget cuts from the original California Proposition 13, she never looked back, but instead spent the next year studying voice as she had always wanted to do, auditioned and was accepted into the San Francisco Opera Chorus, where she worked and sang professionally for the next 13 years. During that time as well, Dottye pursued an independent business as a professional photographer, among other projects photographing her fellow singers, stagehands, and San Francisco Opera colleagues backstage in photographic exhibits displayed around San Francisco, including prominently at San Francisco International Airport. When Dottye?s mother Kate Thompson became ill in the early 1990?s, Dottye returned to Austin to care for her, and when Kate passed away in 1993, Dottye set about transforming the family?s Austin Motel, which had fallen on hard times. Dottye reinvigorated the Motel and its partnership with South Congress Avenue, creating with a dedicated group of employees, tenants, colleagues, friends, and other like-minded entrepreneurs a vibrant, pulsing heart of artistic businesses that continues today to stand as a testament to her vision and creativity. Dottye?s joie de vivre was constant. She was whimsical as well as practical. Her surrender to humor, her embrace of lovely silly moments when her laughter and giggles became infectious, gave joy to all around her. And, as a person who loved people, she was immensely huggable, and a great hugger. Although her struggle with illness eventually took its toll physically, it never dimmed or diminished Dottye?s spirit one iota. Dottye had nothing but gratitude for the untold blessings of her adventurous and productive life, and nothing but appreciation and loving attachment for Austin?s Christopher House where she spent her last weeks, and which she described as ?Heaven on Earth?. Dottye is survived by her daughter Kathryn of Washington, D.C., and her son Mark and daughter in law Ellen of Northampton, MA and her two teenage grandsons, Aidan and Liam; her second much beloved son Michael passed away in 1987. Dottye is also survived by her many transformative lifelong California friendships, her extended family in both California and Austin, as well as all of her colleagues, staff, tenants, and other longtime Austin associates with whom she shared her love and passion for South Congress Avenue and the Austin Motel, the living and breathing heart of her conviction that people and their connection to each other were the only essential foundation upon which to build a business or a life. A celebration of Dottye?s life will take place at the Zilker Park Clubhouse at 200 Zilker Clubhouse Rd Austin, TX 78746 on Monday evening May 23 from 6-8pm (for any questions, please contact Mark Dean at (413) 320-8030, [email protected]). In lieu of flowers, please make donations in Dottye?s name to one of her favorite charities: · Christopher House (2820 E Martin Luther King Jr. Dr., Austin, TX 78702; 512-322-0747, www.Hospiceaustin.org), the best final transition from this world to the next that Dottye ever could ever have hoped for; · Safe place -for women,children, and men whom are looking to change their lives from oppression and violence to a better life (www.safeplace.org) · Health Alliance for Austin Musicians for the mental and physical health of Musicians in our area (www.myhaam.org) The Zilker Club House may be accessed via Rollingwood Drive. Rollingwood Drive may be reached by Barton Springs Road westbound, or the northbound frontage road of Mopac using the Barton Springs/Zilker Park/2244 Exit. For either access route, turn westbound onto Rollingwood Drive (up a hill), if you are using the northbound frontage, you will turn left and travel under the MoPac overpass. Turn right onto Zilker Club House Road (the road is narrow park access road). Proceed to the main gate. Parking is available for approximately 60 cars, and parking is STRICTLY PROHIBITED outside the main gate.

The family of Dottye Dean created this Life Tributes page to make it easy to share your memories.

Send flowers to the Dean family.