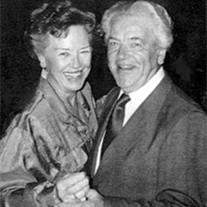 EDNA THORNLEY SMITH Edna Thornley Smith, 85, a longtime resident of Lake City, Florida passed away May 20, 2009 at Regency Village Care Center, Austin, Texas. She was visiting her daughter and son-in-law when she became ill. Edna was born in Manchester, England on February 28, 1924. She met her husband in the final days of World War II after he was discharged from the British Army after being wounded in Italy -- he served from 1939 to 1945 in France, Africa, India, Persia, the Middle East, Sicily and finally Italy. He came to work at the Manchester aircraft parts factory where Edna had contributed to the Allied war effort. A passionate ballroom dancer, Edna insisted he learn to dance before she would go out with him. Edna came to the United States in 1964 with her engineer husband, Mo, and their two children, Christopher and Hilary. She resided in Lake City, Florida for much of the last 30 years and was a very active, longstanding member and former president of the Shands Lake Shore Auxiliary. Before retiring, she worked as the church bookkeeper at First Presbyterian Church of Lake City. An athlete all her life, she was an avid tennis player until her late seventies. Edna was preceded in death by her husband of 48 years, Mo Smith, and her son, Christopher G. Smith. Survivors include her daughter, Hilary Hylton Silva and son-in-law, Peter A. Silva, Austin, Texas; granddaughter Sarah Traylor of Eagle Lake, Florida; great-grandson, Christopher Traylor; and daughter-in-law, Joan Dowling of Bradenton, Florida. A private family graveside service will be held at Oak Hill Cemetery, Lakeland, Florida. where she will be laid to rest next to her beloved husband and son. In lieu of flowers donations may be made to the Humane Society of the United States, www.hsus.org.

EDNA THORNLEY SMITH Edna Thornley Smith, 85, a longtime resident of Lake City, Florida passed away May 20, 2009 at Regency Village Care Center, Austin, Texas. She was visiting her daughter and son-in-law when she became ill. Edna was... View Obituary & Service Information

The family of Edna Smith created this Life Tributes page to make it easy to share your memories.

Send flowers to the Smith family.