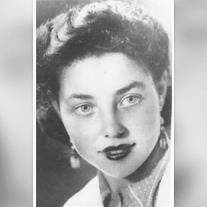 Evelyn Miler Huntington Evelyn Miler Huntington, 88, passed away peacefully on October 11th, 2014, in Austin, Texas. Evelyn was born on June 3, 1926, in Zagreb, Croatia. After World War II, she met and married George R. Huntington, Jr. and they made their home in Rosenberg, Texas, until 2002 when they moved to Austin, Texas. Her generous heart will be missed by all who knew her. Evelyn was preceded in death by her beloved husband George, her parents Alfred and Klara Miler, and her brother Alan Miler. She is survived by her children, Mary Claire Huntington, Georgie Huntington Zaidi and husband Sarfraz, and George Robert Huntington as well as her grandchildren, Greg, Emily and Ryan Huntington and Zareena Zaidi. Funeral services will be held on Saturday, October 18th at 10 A.M. at the First Unitarian Universalist Church at 4700 Grover Ave. in Austin. There will be a short graveside service at Greenlawn Cemetery in Rosenberg, Texas, at noon on Sunday, October 19th.

The family of Evelyn Huntington created this Life Tributes page to make it easy to share your memories.

Send flowers to the Huntington family.