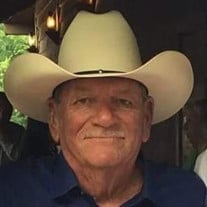 Floyd Shows (Papa), 75, of Pflugerville, Tx, passed away on Saturday, February 23, 2019. He was born as a twin on April 8, 1943, in Cuero, TX, to the late Adam and Mittie Slaughter Shows. He was preceded in death by his loving wife of 54 years, Marcella (Marcie) Shows. He is survived by his children; Debbie Bartholomew and her husband Sam of Pflugerville; Sharon Mansell and her husband Travis of Manor; Floyd A. Shows and his wife Rachel of Austin; grandchildren, Keith Pearson, David Pearson, Chance Mansell and his wife Stephanie, Cailey Fritz and her husband Ryan Fritz, Paige Bartholomew and Tyler Shows; great grandchildren, Kristopher Pearson, Keyon Pearson, Colton Mansell, Jayce Pearson and Haylee Mansell. He is also survived by his brother-in-law, Ervin Lev of League City and a sister-in-law, Bonnie Fitch and many other nieces and nephews. He was also preceded in death by his brothers; Melvin Shows, Lloyd Shows, Leroy Shows, James Shows, Jimmy Shows; and sister, Gladys Roggenkamp. Floyd worked in the oil fields in his earlier years and then in his later years he worked as a painter in construction. He enjoyed spending time with his late wife, Marcella going to the beach and planting their garden of tomatoes every spring. Every morning you would find him on the back porch having his coffee and in the evening you could find him on the front porch having a cold drink. It made his day when family or friends would stop by to visit and have a good conversation. He loved to barbeque and just being outdoors. He was a very strong man and survived his battle with cancer. He will be missed by many but we are comforted to know he has been reunited with the love of his life. A small Memorial for family and friends is being planned for a later date.

The family of Floyd Shows created this Life Tributes page to make it easy to share your memories.

Send flowers to the Shows family.