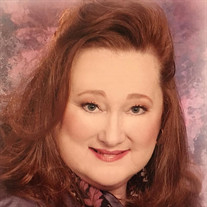 Frances (Fran) Wigley Pilo entered her Heavenly home on Monday, April 27, 2020. Fran was a loving mother, a caring sister, a sweet aunt and a forever friend. She was born in Aiken, South Carolina on October 5, 1950 to Leroy Chandler “Red” Wigley & Frances Jeanette Wigley. She was the oldest of 5 siblings and loved her family whole heartedly. Growing up and spending summers on the farm with her Aunt Dell, Uncle Buddy and cousin Jerry always held a special place in her heart. Which she frequently visited her entire life to keep her roots alive. She graduated L-B-C High School in the class of 1968 and attended Clemson University where she met and married her husband Richard Pilo. (Go Tigers!). They were married for 28 years and had one daughter, Amy Pilo. She has lived in many places throughout her life: Long Island NY, Mesa Arizona, Albuquerque, NM, Pelham NH and Austin, TX. Along the way she met many wonderful people and touched the lives of each and everyone with her kindness, sense of humor, generosity, and intelligence. Fran was an avid Barry Manilow fan and belonged to the Barry Manilow fan club for over 50 years. She attended numerous concerts with family and friends but attending with her best friend Billie Jean was always an adventure. One of her hobbies included scrapbooking all her Barry Manilow memorabilia of concerts, book signings and pictures. Traveling also held her interest, which inspired her enter the travel industry. She worked for Thomas Cooke Travel before owning her own travel company. In 1996 she became President and Owner of Pinnacle of Travel, in Austin, Texas. Among, many corporate accounts and recreational travel, Pinnacle of Travel was the official travel agency for the Austin Ice Bats, WPHL hockey team. She was the President of the Austin Ice Bats booster club and attended many hockey games, near and far, with her friend Susie Mather. These were some of the best times of her life. In 2002, Fran was diagnosed with End Stage Renal disease. She was on dialysis for 15 years and was a strong fighter for herself and her daughter. She was also a strong advocate for others who needed attention, help, or advice. Fran had a sincere appreciate for the special dialysis techs Rosie, Casey and Joseph who took great care of her. Fran was a generous woman who donated to multiple charities such as Special Olympics, Blue Santa and the Salvation Army. She worked at the Austin Police Department for many years and assisted in the Blue Santa program until she retired in 2013. She also volunteered her time and efforts in association management especially for the Texas Rodeo Cowboy Hall of Fame. After her retirement, Fran was able to spend more time with her sister Kay. They had a special bond and shared many vacations together throughout the years from Disney World to Virginia Beach and the latest to the Magnolia Café in Waco, TX. Fran loved her little sister and felt safe when Kay was there for her the last few months of her life. Fran was a beautiful woman inside and out and will be truly missed by all her friends and family. She is survived by her daughter Amy Pilo, Austin, TX, and her sister Kay (George) Leagans, Ware Shoals, SC. Nephews: Joel Leagans, Austin, TX, Daniel (Courtney) Leagans, Simpsonville, SC, Joe Wigley, Bath, SC. Great nieces: Kelly, Taylor, Braelyn, and Blake. Great nephews: Colton, Christian, Luke and Scotty. Special Cousin Jerry (Susie) Andrews, Tennille, GA. She was predeceased by her parents, her maternal Grandmother Sophie Waller and her brothers Joe, Cleve and Barry. Memorials can be made to the National Kidney Foundation in honor of Frances Pilo at www.kidney.org. “My mother was the strongest, smartest and most loving woman I know. I can only strive to be like her. She has fulfilled her promise to God in raising me and now she is free to be the angel she always was on earth, now in the heavens above. I will always love you mom”. – Your loving daughter, Amy.

Frances (Fran) Wigley Pilo entered her Heavenly home on Monday, April 27, 2020. Fran was a loving mother, a caring sister, a sweet aunt and a forever friend. She was born in Aiken, South Carolina on October 5, 1950 to Leroy Chandler &#8220;Red&#8221;... View Obituary & Service Information

The family of Frances Louise Pilo created this Life Tributes page to make it easy to share your memories.

Send flowers to the Pilo family.