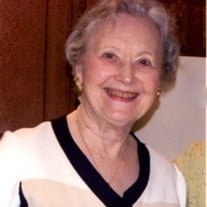 Gabrielle “Gay” Florida Tetreault Descouzis was born on Dec. 22, 1917 and departed this world on April 29, 2014. Born in Pawtucket, RI, Gay was the oldest of 5 children raised in a bilingual French/English family in Providence. She grew up dancing to Big Band music with her Uncles, and spoke with a “Bahston” accent to her dying day. Her first job was as Executive Secretary to the President of Rochambeau Worsted Company, a woolen and worsted mill that came to Providence from Rubaix, France. Gay married a Frenchman in 1951 named Paul Descouzis, who was in the Diplomatic Service in Boston, acting as Chancellor of Toulouse, France. Paul became a Professor of Romance Languages and taught at number of Universities. Gay and he enjoyed traveling throughout the US and Europe, vacationing and visiting family. In her fifties, Gay went into real estate in Greensboro, NC. She & Paul moved to Austin, TX after retirement to be near their youngest daughter, Denise. After Paul’s death in 1991, Gay moved to the Summit at Westlake Hills in 2004. With friends, she spent many happy hours socializing and knitting booties and bonnets for premature babies at Brackenridge Hospital. Gay is survived by 2 daughters, Jacqueline Kritzer (husband Tom) of Cupertino, CA, and Denise Descouzis (husband Joe Huerta) of Austin, plus grandchildren Robert Kritzer (wife Christy) & Elizabeth Kritzer (husband Aaron Serafin). Gay will be buried alongside Paul at St. Ann’s Cemetery in Cranston, RI. In lieu of flowers, please make donations to: Heart to Heart Hospice: 4009 Banister Ln., Ste. 100, Austin, TX 78704 or The Charity of your choice.

Gabrielle &#8220;Gay&#8221; Florida Tetreault Descouzis was born on Dec. 22, 1917 and departed this world on April 29, 2014. Born in Pawtucket, RI, Gay was the oldest of 5 children raised in a bilingual French/English family in Providence.... View Obituary & Service Information

The family of Gabrielle Florida Descouzis created this Life Tributes page to make it easy to share your memories.

Send flowers to the Descouzis family.