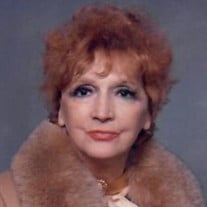 Golda Louise Huston died February 15, 2019, surrounded by her adopted family of friends and volunteers. She was born May 10, 1921, in Pioneer, Texas to Charles Hiram Foster and Jessie Jewel Foster. Golda was adventurous, hardworking, artistic, creative, and flamboyant. She grew up on a cotton farm and worked the fields alongside her father and younger brothers. Although she attended a one-room country school and had little formal education, she was an avid reader and eager learner who enjoyed a long and successful career in the women’s retail clothing business. She began her career in Abilene, Texas as a clerk in the Franklin’s Store and quickly became a store manager. Although she did not consider herself to be a Feminist, she stood up for herself—as when another manager made unwelcomed advances, and she removed one of her shoes and struck him in his head with its heel. She was also an advocate for equal rights long before it became an issue with national focus. Her retail career led her to stores in New York, Hollywood, and finally Austin where she found a professional home at Yaring’s Department Store. She had an innate ability to know what her customers would buy and was a savvy buyer on yearly trips to market in New York. She was also the organizer, director, and commentator of style shows throughout her career. Golda had a loyal following and prided herself on dressing her couture clientele, many of whom stayed in touch with her after her retirement. In retirement, Golda continued to be creative. She enjoyed writing poetry, journaling, scrapbooking, shopping for clothing bargains, adorning her purchases with flare, and using paint and gold-leaf to embellish almost every surface in her home. Her sense of style included her trademark red hair and long false eyelashes. She became a member of the First Baptist Church of Austin in 1978 and regularly attended church and Sunday school until her health began to fail. Golda was preceded in death by her parents Hiram and Jewel Foster; her three brothers Charles H. Foster, Billy Wayne Foster, and Eugene Foster; and her former husband, Dale Huston. She is survived by her son Don Huston and wife Alice; grandson Dallas Huston and wife Cynthia; two grandsons, Benjamin and Jacob Huston; two cousins, Henry L. Foster and Mary Charlene Foster-Deans; numerous nieces and nephews, and the many friends and volunteers who were instrumental in her living independently at home until recently. Thank you, Family Eldercare, Meals on Wheels, Outreach Home Health, Encompass Home Health, and Ministering Physicians for improving Golda’s quality of life. Thank you, to the staff of Gracy Woods Nursing and Rehabilitation Center who helped Golda return to her home twice during 2018 after illnesses and for your loving care of her during her final week of life. A memorial service for Golda will be held at the First Baptist Church of Austin, 901 Trinity St, Austin, TX 78701 on Saturday, March 2, at 2:00 p.m. In lieu of flowers, please make donations to Family Eldercare, Meals on Wheels, or the First Baptist Church of Austin. Arrangements are pending for a family memorial service and interment at Elmwood Memorial Park in Abilene Texas.

The family of Golda Louise Huston created this Life Tributes page to make it easy to share your memories.

Send flowers to the Huston family.