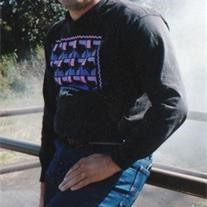 Harold Marin Stanley July 16, 1963 ? August 21, 2011 Harold Marin Stanley, 48, passed away on Sunday, August 21 in his home in Austin. Harold was born in Austin, TX on July 16, 1963 to Joseph and Crescencia Stanley. He graduated from Austin High School in the Centennial Class of 1981 and afterward attended the University of Texas at Austin while working at Sears and Austin Parks and Recreation. Harold joined the Navy in 1991 when he was 28 and was stationed in Hawaii at Barbers Point Naval Air Station. He was commended several times most notably for moving navy aircraft to safe quarters out of the path of Hurricane Iniki. While in the Navy, Harold attended the University of Hawaii and spent time surfing. After being honorably discharged in 1995, Harold returned to his home town of Austin. From the time he was young and deconstructed his mother?s sewing machine, Harold loved to take things apart. When he got older, he also put them back together, which led to a career in computer and technology, most recently for Aerotek and ThermoFisher Scientific. Harold was a loyal and helpful friend, and a devoted husband and father. He enjoyed the simple pleasures of life. He was a music fan, having been a trombonist in the Austin High School orchestra and a member of the brass section in the Barbers Point Navy band. Harold also enjoyed going to concerts, particularly when the band Chicago was featured. Summer was Harold?s season. Fireworks, swimming, and fresh peaches and watermelon are things he longed for. He was a confident swimmer. He was both a lifeguard and a swim coach, meeting his wife to be, Robyn, at Shipe Park pool, where he coached her siblings, Amy and Brian, during the summer of 1988. Harold was predeceased by his father, Joseph Stanley. He is survived by his loving wife, Robyn; daughter, Lucretia (Lucy); son, Maxim; daughter, Glynnis; mother, Crescencia; sister, Jane Stanley; sister, Cynthia and husband Jim Brannen; sister, Teresa and husband Jim Kaidy; sister, Mary and husband Stephen Elliott; brother, Joe Stanley Jr.; nieces, Lindsey, Lily, Grace; nephews, James, Spencer, and Aidan; as well as numerous aunts, uncles, cousins, and friends.

The family of Harold Stanley created this Life Tributes page to make it easy to share your memories.

Send flowers to the Stanley family.