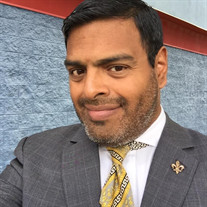 HECTOR BENJAMIN GUZMAN January 19th, 1974 – November 08th, 2019 Our beloved Hector went to be with the Lord after giving all he had to combat severe terminal illness that effected his entire body. He kept a positive attitude and would tell everyone I’m fabulous” when I knew better. Hector was briefly on Encompass Hospice and left us peacefully. I will always be grateful to the Lord for this. Hector had a passion for life, for other’s, and always looked for the, “bling and sparkle “ in everything. He was thoughtful and loved to surprise friends and family with hand made gifts. Hector was quite talented and I always reaffirmed that to him. He loved his family, especially his nieces and nephews. His niece, Audrina, asked him to make her a necklace for a special project as school, Hector promptly went to Michael’s to find beads and just the right colors of accessories and threads. He was already weaker, but insisted this must be done. He asked me to bring all those supplies to the hospital. He was quickly placed in ICU for several days. When he arose from the comatose state and could talk again, he asked where the beads were, “ I cannot let Audrina down” were his words. Tearfully, I replied that this has already been taken care of and Audrina understands and loves you very much. This was who Hector was; a kind, thoughtful, giving man. He will be missed by many family and friends. We want to give special thanks to First Baptist Austin for all their love and support. Also, a huge thanks to all our loving neighbors. Thank you as well to Encompass Home Health and Hospice for making his final days dignified and comfortable. A huge acknowledgment of thanks to Marion, RN and Vicki, RN for all your tender, loving care. Hector was proceeded in death by his beloved mother, Debora Guzman, whom he held dearly in his heart. His surviving family include his father, Noe Guzman, Sr. and step mother, Juanita Guzman. Brother, Noe Guzman, Jr., sister, Carolyn G. Beatty, her husband, Micheal Beatty. Brother, Andres B. Guzman, W. Craig Moore, partner. Nieces and nephews: Julia M. Guzman, Gabriel I. Beatty, Matthew A. Beatty, Zachary D. Beatty, and Debora P. Guzman, and Andres B. Guzman, Jr. Also, endearing nieces and nephews, Heidi Castillo, Audrina Boyerman, Aaron Boyerman, and Caleb Boyerman. He also leaves behind many loving aunts, uncles, and cousins. Monica Boyerman was his closest cousin and confidant, who he was so grateful to have. Hector’s memorial service will be Saturday, December 14th at 2 pm at First Baptist Austin located at 901 Trinity Street, Austin, Texas 78701 Further memorial services and final internment will be held in California and are pending future announcement surrounding his birthday. Please make all donations to First Baptist Austin in his name. He was very concerned about the homeless and the many other outreaches that the church serves. His favorite flower was the orchid, but loved all flowers for those who want to send flowers to the church memorial service. A very special thank you to my Brookdale Hospice Team for your excellent support during this time.

HECTOR BENJAMIN GUZMAN January 19th, 1974 &#8211; November 08th, 2019 Our beloved Hector went to be with the Lord after giving all he had to combat severe terminal illness that effected his entire body. He kept a positive attitude and would... View Obituary & Service Information

The family of Hector Benjamin Guzman created this Life Tributes page to make it easy to share your memories.

Send flowers to the Guzman family.