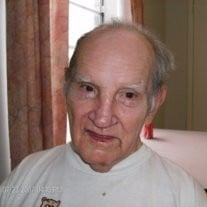 Henry Thomas DeLoche, 81, passed away on Saturday, January 4, 2014, after a brief illness in Rollins Brook Hospital, Lampasas. Viewing and visitation will be held from 9 AM until 11 AM at Afforable Burial & Cremation at 2006 N. WS Young Drive Suite # 60 on Thursday, January 9, 2014. A graveside service will follow at 11:30 AM at Killeen Memorial Cemetery on 3800 Lake Road. Henry (Hank) was born on July 23, 1932 to Catherine Bobolsky and Henry T. DeLoche in Pittsburg, PA. He grew up spending his time between his maternal grandparents in Portage, PA, and with his parents in Pittsburg. Hank, from age 11 through 14, attended Toner Institute for Boys run by the Capuchin monks. He went to Taylor Allderdice High School and left around 1950. Mr. DeLoche moved to Detroit, MI after high school for better opportunities, and to be with his father. He attended Lawrence Technological University and graduated in 1957 with a degree in Mechanical Engineering. Hank worked in the engineering field for a couple of years, and then found a more lucrative career to expend his time, charisma, and energy. Mr. DeLoche sold Kirby Vacuums for a Detroit Kirby distributor. Hank won a lot of trophies, jewelry, convention trips, and other items. He achieved the Top Salesman of the Year in 1977 for Kirby Vacuums Central Division. Hank later left Kirby, and opened up his own successful business. More than that, Mr. DeLoche was charming, kind, and generous. He was known as a very giving man, and would always help people out in any way that he could. Henry relocated to Texas in 2002 to be close to his daughters. Hank was preceded in death by his parents, his half-sisters, many aunts and uncles, and his only son, Henry Thomas DeLoche V. He is survived by his daughter, Kim Baggett and her fiancé, Gary McQueen, both of Killeen, and his other daughter, Jackie Fish and her significant other, Patrick Fernandez, both of Harker Heights. He also leaves behind four grandchildren, James Baggett, Stephen Baggett, Brandon Clough, Sandie Fish, and three great-grandchildren, Mackenzie, Shelby, and Liam. In addition, Hank leaves three step-daughters, Sandy (Mitch) Kramer, Sheryl Luttman, and Marilee Foster, all from Michigan, to mourn his passing. There are also other step-children, and many step-grandchildren whose lives were made richer by knowing Henry DeLoche. The family wishes to give a special thank you to all the nurses, aides, and employees at Regal Nursing and Rehabilitation Center, especially those working on A Hall. They were responsible for Hank’s care and life for the past seven and a half years as he slipped into the world of Alzheimer’s disease. Everyone in the whole building loved and cared for Hank as one of their own and made his life pleasant and purposeful. Thanks also go to Dr. Robin Cain and Dr. Lane for taking good care of Hank’s health, comfort, and well-being. It has always been a great comfort to the family that Hank was safe, and loved.

Henry Thomas DeLoche, 81, passed away on Saturday, January 4, 2014, after a brief illness in Rollins Brook Hospital, Lampasas. Viewing and visitation will be held from 9 AM until 11 AM at Afforable Burial & Cremation at 2006 N. WS Young Drive... View Obituary & Service Information

The family of Henry Thomas DeLoche created this Life Tributes page to make it easy to share your memories.

Send flowers to the DeLoche family.