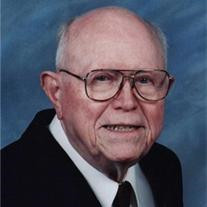 Herman C. Hankins, age 94, died on February 20, 2011, in San Marcos, from complications of Alzheimer?s Disease. A friend of the family described his death as a sad blessing. He was a kind, friendly, and generous person, traits which were never completely extinguished by his fifteen years of experience with Alzheimer?s. He is survived by his son Lamar W. Hankins, daughter-in-law June Chase Hankins, granddaughter Dahrl Chase Hankins Bartlett, great granddaughter Ava June Bartlett, all of San Marcos; niece Paula English Boneau of Port Arthur; nephew Darrell English of Hackett, Arkansas; cousin Noni Wilson Hartwell and husband James of Amarillo. He was preceded in death by his parents and by his wife Arthur Mae ?Smitty? Hankins, and his younger son Calvin Ray Hankins of Nederland, his sister Marcille English and his brother Doward Hankins both of Port Arthur. His wife?s family were all devoted friends: Marion Medlock and husband Rusty of McKinney, Texas; Doris Fail (and her late husband Johnny) and Joe Smith (and his late wife Jimmy Ann) and wife Carol, and the late Marjorie Kirk, of Wildwood, Village Mills, Texas; and Winnie Haynes (and her late husband Lee) of Tyler, along with a host of cousins, nieces, and nephews of all degrees, along with many friends, including the special friends of Herman and Smitty, Betty and Jack Barbee of Wildwood. Herman was born in Healton, Oklahoma, on October 10, 1916, to Zora Belle McGee Hankins and Henry Hankins. His family moved to Dew, Texas, shortly after his birth, then to Chillicothe, Texas, before moving to Port Arthur around 1922, when Henry was hired to work at the Texas Company refinery. Herman was a machinist at Texaco, and later a supervisor, for 44 years before his retirement in 1979. In 1980, Herman and Smitty moved to Wildwood, where they lived until 2000, when they moved to Calderwoods in Beaumont. In 2006, they moved to San Marcos to live with their son and daughter-in-law. Herman served in World War II in the United States Army?s 601st Anti-Aircraft, Artillery Battalion from November 13, 1941 to December 2, 1945. He was a life-long member of the Methodist Church, helping to build the original Aldersgate United Methodist Church at its present location in Port Arthur, and Wildwood-Village Mills United Methodist Church at its present location in Village Mills. Herman was an avid 42 and domino player. Just two weeks before his death, he was still able to match dominoes, though his abilities at strategy had waned because of Alzheimer?s. A memorial service will be held at the Wildwood-Village Mills United Methodist Church, 5943FM 3063, Village Mills, at 10:30 am, Saturday, February 26, 2011, with the Rev. Eldon Reed officiating. Condolences may be sent to Herman?s family at P. O. Box 665, San Marcos, Texas 78667, or memorial contributions to Wildwood-Village Mills UMC, P. O. Box 332, Village Mills, TX 77663.

Herman C. Hankins, age 94, died on February 20, 2011, in San Marcos, from complications of Alzheimer?s Disease. A friend of the family described his death as a sad blessing. He was a kind, friendly, and generous person, traits which were never... View Obituary & Service Information

The family of Herman Hankins created this Life Tributes page to make it easy to share your memories.

Send flowers to the Hankins family.