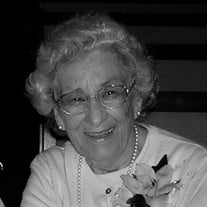 Irene Dorothy Kulinski March 12, 1922-January 25, 2015 Belton, TX formerly of Berwyn IL---Irene Dorothy Kulinski passed away peacefully at her home in Belton, at the age of 92. Irene was born March 12, 1922, in Dudley, Massachusetts to Vincent and Mary Sespaniak. On Nov.7, 1940, she married Edward Stanley Kulinski at Holy Name Cathedral in Chicago, IL. Irene moved to Berwyn, IL and was a stay-at-home mother until her children were in high school. She then worked in the library and later business office at Morton East High School in Cicero, IL until retiring. In 1986 she moved to Belton with her loving husband. Irene was an avid gardener, seamstress, and a very devoted member of the Catholic Church. Over the years, she enjoyed spending time with her family, traveling, ceramics, cooking, baking, word searches, playing dominoes and cards, and enjoying sitting outside. Irene is survived by her husband of 74 years, Edward; her eight children: Edward (Marianne) Kulinski of La Grange Park IL, Kenneth (Mary) Kulinski of Wauconda IL, Ann Marie (Mike) Perry of Janesville WI, Carole (Mike Cripe) Kulinski of Berwyn IL, Margaret (Tom) Vogt of Olathe KS, Jane (Bob) Kolar of Bridgeview IL, Susan Hardy of Grayslake IL, 18 grandchildren and 22 great-grandchildren. Irene was preceded in death by her son Tom, and her parents. Irene was a loving and caring wife, mother and grandmother and will be truly missed. Anyone planning an expression of sympathy may wish to consider a memorial to the Discalced Carmelite Nuns, 5801 Mt. Carmel Dr., Arlington, TX 56017-4202. A celebration of Irene’s life will be held at a later date in Berwyn, IL with interment at Queen of Heaven Cemetery in Hillside, IL.

The family of Irene Dorothy Kulinski created this Life Tributes page to make it easy to share your memories.

Send flowers to the Kulinski family.