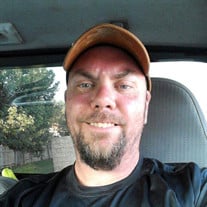 James “Jimi” Darrell Blankenship, 47, went on to be with our Heavenly Father on March 7, 2015 after a year-long battle with Esophageal Cancer. Jimi was born in Downey, California on November 22, 1967. He is proceeded in death by his mother, Vina Arlene Bausch Blankenship, his father, Jack A. Blankenship, and his brother Jack W. Blankenship. Jimi is survived by his finance, Sheri Lyn Hernandez; his daughter, Blanca Sarah Garcia; and step-sons, Troy Morphew and wife Allegra Henry and children, Dylan Morphew, Bryce Prather and Austin Hernandez. His step-mother Roberta “Bobbi” Blankenship, step-brother, Brandon Byrns, step-sister Heather Byrns. Along with many nieces, nephews and friends he considered family. Jimi never met a stranger and became friends with everyone he met. He was always there to help anyone in need. He worked as a tow truck driver for 25+ years, always with a smile and never complaining. As a young man, he loved being at the race track and being involved in the VW club and later in life, the Scion Club. He also enjoyed building and racing slot cars, and being the boys’ baseball coach. His love for his family was unfathomable. He loved Sheri with all his heart, and loved her boys like they were his own, his daughter, and mostly being a grandpa to Jordyn and Kaiden Morphew. A memorial service is planned for April 25, 2015 in Round Rock, Texas. (Location TBD) Please check back for updates. In lieu of flowers, donations can be made to the family to help with living and final expenses through Go Fund Me: www.gofundme.com/jimiblankenship God Bless you, Jimi Loves you all!

James &#8220;Jimi&#8221; Darrell Blankenship, 47, went on to be with our Heavenly Father on March 7, 2015 after a year-long battle with Esophageal Cancer. Jimi was born in Downey, California on November 22, 1967. He is proceeded in death by... View Obituary & Service Information

The family of James Darrell Blankenship created this Life Tributes page to make it easy to share your memories.

Send flowers to the Blankenship family.