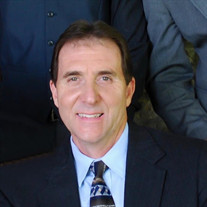 James Douglas Dedear September 5, 1962 – September 19, 2020 James Douglas Dedear (Doug Dedear), age 58 of Lexington, Texas, went home to be with the Lord Saturday evening, September 19, 2020. A celebration of Doug’s life will be held at 10 AM on Thursday, September 24, 2020, at the First Shiloh Baptist Church, located at the intersection of FM112 and CR 481, physical address being 100 CR 481, Thrall, Texas, with Brother Ray Dennis officiating. Doug was born on September 5, 1962 in Burnet, Texas, to Claude and Irene Dedear. Being faithfully raised in church, Doug accepted Jesus as his Savior at the tender age of nine and was baptized. He was raised in Florence, Texas, and graduated from Florence High School where he met and married his high school sweetheart, Becky Roznovak. The two were married on September 24, 1983. Prior to marriage, he attended Temple Junior College where he earned an Associate of Applied Science degree in architectural drafting and design. He worked for Central Texas Tiltwall of Pflugerville right out of college until 1985 when he entered into the Austin fire academy, which led to a 27 year career as a professional firefighter with the Austin Fire Department. Doug lived almost half of his married life in Georgetown before moving to Lexington where he was active in the community and coached several youth sports teams. He was most proud to be involved in the homeschooling community. He and his wife directed a homeschool coop and athletic program in Lexington for many years. He loved teaching and mentoring young people, and being involved in the training up of children for God. He coached basketball for the better half of two decades and impacted many lives. Doug Dedear wore many hats, was a faithful friend, and touched many people’s lives and hearts. He loved the Lord. He was a member of First Shiloh Baptist Church where he served God by teaching Sunday school, being a youth pastor, serving as a deacon, and singing with the praise team. Doug was blessed with three sons and made it his life’s goal to raise Godly young men. He was a devoted husband, father and grandfather. His wife, children, and grandchild brought great joy and love into his life. Doug was a country boy through and through – he loved collecting guns and knives. He loved his country as well. He had an amazing life filled with family and friends, and will be remembered for his strong commitment to God, his family, and life. Mr. Dedear was preceded in death by both his parents. He is survived by his wife of 37 years, Becky Dedear, sons Jordan Dedear and wife Laura Kate of Austin, Reid Dedear and Fiancée Samantha Santora of Parker, Colorado, Ethan Dedear and wife Ashley of Bastrop, and his sisters Alecia Dedear of Belton, Karen Havins and husband Charlie of Florence, and Claudia Melton and husband Edd of Youngsport. Also, survived by his only grandchild, four-month-old James Cole Dedear, along with numerous nieces, nephews, and family. Doug’s body will be laid to rest at Lexington Cemetery. In lieu of flowers or food, donations can be made to the American Bible Society, Wycliffe Bible translators and First Shiloh Baptist Church building program.

The family of James Douglas Dedear created this Life Tributes page to make it easy to share your memories.

Send flowers to the Dedear family.