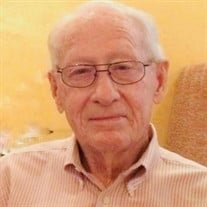 James (Jim) Edward McCowan, 95, of Austin, Texas passed away peacefully on Tuesday September 21, 2021. The funeral service will be held graveside on Friday, October 8, 2021, at 1:00PM at the Austin Memorial Park Cemetery 2800 Hancock Dr. Austin, (section 11 – take 1st right after entering) with a reception to follow at Chez Zee 5406 Balcones Drive 2pm. (Outdoor patio) Jim was born on August 25, 1926, in Hot Springs Arkansas.  He was in the Delta Sigma Fraternity at Henderson State University and graduated with a degree in Economics.  He met his wife in college, and they were married for 49 years before she passed 2000. During WWII in 1945, he joined the United States Army.  He was training to be a pilot when the war ended.  In 1954 he was honorably discharged as a First Lieutenant from the Army and accepted a position as District Manager with the Joseph Schlitz Brewing Company in Little Rock, AR. He held several positions with the company through the years and was promoted to Vice President in 1975 in Milwaukee, WI working primarily on mergers and acquisitions.  In 1990 following many moves, living in eight states and extensive travel it was time to retire and escape the northern climate.  He and his wife Wanda moved to Austin, TX.   Jim work with the Travis County elections for many years. A devoted father, husband and grandfather. His grandchildren were his pride and joy. He loved spending time with family and attending all their sporting and school events. He loved sports and buying new cars.  Jim was a long-time member of Riverbend Church, Austin TX.  He is preceded in death by his wife, Wanda J McCowan, both of his parents and his brother John Richard (Dick) McCowan. He is survived by his two daughters Jami McCowan-Hatch and her husband Kurt and their 2 children Jordan (husband John) and son Cameron. Daughter Patricia McCowan Mitchell of Madison, WI and her 6 children, Tiffany, son Odin, Charlotte (husband Nick), Robert, Gabriel, Samuel and Michael.  He is also survived by his sister-in-law, Barbara McCowan and her 2 children Michael and Sandra of Hot Springs, AR. I lived my life to hear You say; Well done my good and faithful one.  My beloved child, you have run the race and now you're home.  Welcome to the place where you belong. 2 Timothy 4:7 - I have fought the good fight, I have finished the race, I have kept the faith - Memorials can be made to the Alzheimer's Foundation:   https://alzfdn.org/support-us/donate/

The family of James Edward McCowan created this Life Tributes page to make it easy to share your memories.

Send flowers to the McCowan family.