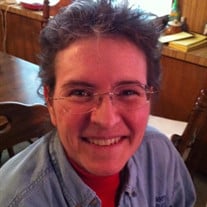 Jayna K Morgan, 57, of Round Rock, Texas passed away Sunday April 4th, 2021. Jayna started her life in Sanford, Florida born to Jane and Paul Morgan on September 15, 1963. The Morgan family moved to Hayesville, Kansas, where Jayna and her brother Mike grew up in the country. This is where Jayna's love of animals and plants started. Throughout her life, Jayna enjoyed all kinds of plants and even worked in an animal shelter for a few years and volunteer at a Zoo one year. Jayna was taught how to stand riding on a draft horse by Mr Tarzan. During her childhood, she was raised around the following animals: horses, donkey, geese, ducks, chickens, cats, and a bunch of dogs. No matter what the animal they had a special place in Jayna’s heart. After Jayna graduated from Circle High School in Towanda, Kansas, she attended a 2 year vocational school for computers. Really motivated, Jayna doubled on her classes and graduated in 1 year. After completing her computer training, Jayna traveled throughout the United States installing MLS Systems. She lived in several states including Florida, Georgia, and North Carolina before moving to Austin, Texas in October of 1991. Jayna was well-versed in computer architecture and network system administration and worked in this capacity through 2011. Over the next few years, Jayna became interested in online training and investments. In 2020 she jumped into being an online investment/trading. In 1992, a mutual friend introduced Jayna to Dee and the rest as they say is history. Dee knew when she met Jayna that Jayna would always be in her life in some way. The friendship that started in 1992, blossomed into a permanent relationship in 2006. Vows and rings were exchanged and their commitment to one another was witnessed by all. November 20, 2015, was a joyous day when Jayna and Dee were able to be legally married. Jayna was preceded in death by her father Paul Morgan. She is survived by her life partner Dee Dryden, mother Jane Morgan, brothers Mike Morgan and David Yeargin, mother-in-law, Bernice Dryden, and sisters-in-law, Connie Jenschke, Linda Laumann, and Donna Terry, Jan Delaney, and cousin, nieces and nephews. To share in the celebration of Jayna's life, please go to the Tribute Wall with memories, funny stories, thoughts and pictures.

Jayna K Morgan, 57, of Round Rock, Texas passed away Sunday April 4th, 2021. Jayna started her life in Sanford, Florida born to Jane and Paul Morgan on September 15, 1963. The Morgan family moved to Hayesville, Kansas, where Jayna and her brother... View Obituary & Service Information

The family of Jayna Morgan created this Life Tributes page to make it easy to share your memories.

Send flowers to the Morgan family.