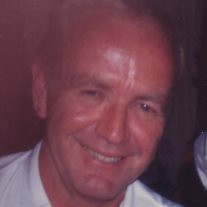 Jimmy C. Box 9-11-1941 to 02-09-2014 Jim passed away on Sunday, February 10th, 2014 after fighting multiple illnesses for years. Jim was born in Forestburg, Texas to J.C. and Christine Box. He was one of 8 children. Jim was preceded in death by his parents, two sisters LaDonna Lang and Bobbie Sherill Goins, and one brother Jan Richard Box. Jim grew up in the panhandle region of Texas attending schools in and around Tulia, Texas where he had many friends and a dog named “Rin.” He learned his trade as a tile mechanic working for Larry and Travis Holley (older brothers of Buddy Holly (Holley)). One of his co-workers and good friend, Robert Gunn, opened his own tile business and Jim went to work for him. One job, in particular, changed his life. Jim moved to Austin, Texas to install tile in the newly built upper deck of Texas Memorial Stadium at the University of Texas at Austin. From that point forward, Jim would always consider his beloved Texas Hill Country his home.  In the early 1970s, Jim started his own business, ‘J Box Tile Co.’ and it became a successful enterprise. Over the years, Jim and his crews worked all over Texas and beyond including Florida, Tennessee, Virginia, Metro D.C., Maryland, and Pennsylvania. Work was Jim’s pastime and his coworkers were his greatest friends. Jim retired to Canyon Lake, Texas in the mid 2000s. Jim is survived by two sons: Stanley Box and Shannon Box; a daughter-in-law Kerry Box; three grandchildren Regan Box, Ryan Box and Levi Box; three sisters Charlotte LeMaster, Cathy Leibel, and Carla Hochstein; and one brother Terry Box. In lieu of flowers the family requests you spend time with your loved ones and friends. No services are planned. Jim’s remains will be scattered at Canyon Lake in the Spring on a date to be determined.

The family of Jimmy C. Box created this Life Tributes page to make it easy to share your memories.

Send flowers to the Box family.