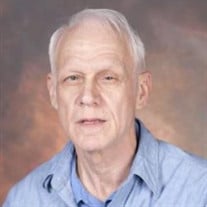 Joe Dell Crunk, 73, passed away Monday, March 22, 2021, at his home in Austin, TX. He was born October 1, 1947 in San Angelo, TX, to Carl Dent Crunk and Jesse Beatrice Bryan Crunk. In 1960 Joe Dell and his family moved to Paint Rock, TX, where he graduated from high school with the class of 1966. His love for music began at an early age. As a sophomore, he played bass and sang in a band known as the Continentals, which included his brother, Bubba, on drums and vocals. Joe Dell had a great sense of humor and once shared a funny memory: The Crunk brothers, with the help of their mother, Bea, purchased a 1947 Buick hearse to haul their band equipment to gigs throughout the state.  After high school graduation, Joe Dell moved to Austin to attend Durham’s Business College. There he joined Ronnie Hurta’s band, known as Ronnie and the Ferrells, as the bassist. The Ferrells played local and regional gigs along with other notable bands. Music remained a large part of Joe Dell’s life, as proven by the massive record collection he amassed over 50+ years. He would go on to earn an engineering degree in broadcasting and moved to Monahans, TX, where he worked as a disc jockey. He later returned to Austin and transitioned from radio to television, working for KXAN (Channel 36) and KVUE (Channel 24). He retired from KVUE in 2014 after working there for 24 years. Joe Dell enjoyed eating his favorite meal with friends at Chuy's, watching Nascar races, feasting at the holidays, and walking his dog. Joe Dell was preceded in death by his parents and grandparents Thomas and Odessa Crunk and Samuel and Sadie Bryan. He is survived by his brother, William F. “Bubba” Crunk, his best canine friend, Mr. Chugs, and extended family and friends. We appreciate the excellent home care provided by BrightStar Care and Choice Hospice in Joe Dell’s final days with us. Life celebrations will be held in Austin, as well as in the Paint Rock area. The dates will be announced once confirmed. If you would like to donate in his memory, please consider Austin Pets Alive, Health Alliance for Austin Musicians (HAAM), or a charity of your choosing.

The family of Joe Dell Crunk created this Life Tributes page to make it easy to share your memories.

Send flowers to the Crunk family.