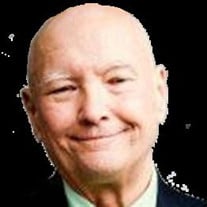 The family of John Dusky Adamson, Sr. celebrates his passing from this earthly life into the glorious reward awaiting those who trust in Jesus Christ for their salvation. They mourn their loss now but rejoice that they will be reunited with him for all eternity. John was born on January 5, 1946 in Coral Gables, Florida to Joseph Sneeden Adamson and Helen (Dusky) Adamson. He grew up in the Florida Keys where he developed a love for the open water, diving and fishing. John was on the Gainesville High School diving team and excelled at mathematics. John served honorably in the United States Army for 9 years, being discharged at the rank of Spec 6, specializing in electronics. John’s final tour included an assignment with the NSA. He met his life-long love, Norma, while serving, marrying on November 5, 1966. Their love welcomed 2 boys into the world. After the military, John worked in various capacities with government and non-government entities related to his expertise in electronics and computers. Amongst his many contributions, John worked on the instrumentation system for the SR-71 Blackbird. After his military contractor days with Lockheed and others, John had a successful career at Sun Microsystems and earned many specialized certifications related to electronics and computers. John called several states home over his life, including FL, CA, MA, HI, MD, NH and finally Texas. John and Norma brought a tiny baby boy, John, to live in Japan for 20 months while serving. His passions included his involvement in church, amateur “ham” radio, and computers. He passed from this life to glory on July 11, 2020 peaceably at his home in Leander, Texas. He is survived by Norma Jeanne Adamson, his wife of 53 years; John Dusky Adamson, Jr, his oldest son; Paul Thomas Adamson, his youngest son; and grandchildren Haylee E. Adamson, Olivia M.M. Adamson, Naomi G. Adamson, Jonah D. Adamson, Viktor D. Adamson, Annabelle J. Adamson, Sean P. Adamson, Joshua A. Adamson, Viktoria R. Adamson, Elsie N. Adamson, Lily M. Adamson, Aidan C. Adamson, and Luci J. Adamson. He also leaves behind many dear and sweet friends who affirm the significant and positive impact he left on their lives. John was proceeded in death by his parents, his brothers Joseph and Thomas, and his sisters Elizabeth and Margaret. Services will be held at Community Christian Church (4300 Sam Bass Road, Round Rock, TX) on [_________]. In lieu of flowers, the family asks that you donate on behalf of John to the American Kidney Fund (kidneyfund.org) or the Texas Fallen Officers Foundation (https://www.texasfof.org/).

The family of John Dusky Adamson, Sr. celebrates his passing from this earthly life into the glorious reward awaiting those who trust in Jesus Christ for their salvation. They mourn their loss now but rejoice that they will be reunited with... View Obituary & Service Information

The family of John Dusky Adamson created this Life Tributes page to make it easy to share your memories.

The family of John Dusky Adamson, Sr. celebrates his passing...

Send flowers to the Adamson family.