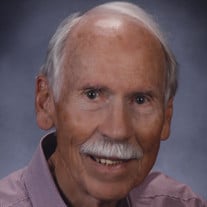 John Ralph Macfarlane, M.D., departed this life on June 15, 2014, surrounded by his loving family in Spicewood, Texas. He was born of goodly parents, Hubert Adams and Ora Belle Orton Macfarlane, at Ogden, Weber County, Utah on June 1, 1931. His parents were first generation descendants of original settlers of the sere and unforgiving soil of Southern Utah’s Dixie. His grandfather, John Menzies Macfarlane, was widely known as a scientist, advocate and musician who composed the often-performed and triumphal Christmas hymn, Far, Far Away on Judaea’s Plains. Dr. Macfarlane attended public schools in Ogden; he was graduated from Ogden High School, and was awarded the degree of Bachelor of Arts with High Honors by the University of Utah in 1955. He was elected to Phi Beta Kappa and Phi Kappa Phi. He attended Cornell University Medical College, receiving the degree of Doctor of Medicine in 1959. He was elected to Alpha Omega and received The Distinguished Physician Award by vote of his classmates. Post-graduate training was at The New York Hospital—Cornell University Medical Center in Manhattan. He was Resident Surgeon at The New York Hospital in 1966. Following a brief period of practice in the San Francisco Bay Area, he returned to Northern Utah to establish the Cardio-Vascular Surgery program in Ogden. Following a brief retirement he moved to Artesia, New Mexico, where he practiced until 2006. Since that time he has resided in the Texas Hill Country at Spicewood. He was married to Sharon Fowles Macfarlane of Ogden and later divorced. They had three children, John Garrett Macfarlane (Carolyn) of Ogden, Roger Thomas Macfarlane, Ph.D. (Karen) of Provo, Utah, and Brooke Karrington (Randall, deceased) of Salt Lake City. He married Sherry Rae Leydsman in 1991 in Billings, Montana, and they have raised three children, Brian Gregory Norton, CPA (Erika) of Denver, Colorado, Lindsay Norton-Dorn (Matt) of Sherwood, Oregon, and Kellie Norton of Austin, Texas, during a long and intense love affair which continues. There are fourteen grandchildren and two great-grandchildren. He is predeceased by all his siblings: Hubert Wayne Macfarlane (1943), Arthur Welling Macfarlane (2008), Karl Orton Macfarlane (1996), Miriam Macfarlane Caldwell (2005), and Beth Macfarlane Orgill Butterfield (2014). Dr. Macfarlane has been active in community affairs and medical-staff functions. He has been Board Member, later Chairman, of Blue Cross and Blue Shield of Utah, Board Member, later Chairman, of the Utah Air Conservation Committee, and President of the New Mexico Chapter, American College of Surgeons. He was an avid bicyclist and incessant reader. In lieu of flowers, friends may choose to donate in his name to the Spicewood Elementary School Library, Spicewood, TX. Send donations to Spicewood Elementary 1005 Spur 191 Spicewood, TX 78669 Please indicate in the check’s memo-line “library/Ralph Macfarlane”. A memorial service is planned for 28 June 2014 at 11 a.m. at the Marble Falls Ward, The Church of Jesus Christ of Latter-Day Saints, 200 Via Viejo, Marble Falls, TX 78654.

The family of John Ralph Macfarlane created this Life Tributes page to make it easy to share your memories.

Send flowers to the Macfarlane family.