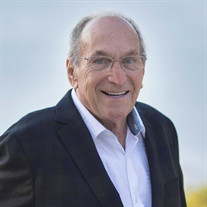 John Bruce Scott II passed away peacefully on Saturday, March 17th, 2018 at his beloved home in Spicewood, Texas after waging a very courageous battle against lung cancer. He was surrounded by his loving wife, Sheryl as well as several devoted friends and family members. John was born on July 7th, 1941 in Pittsburgh, PA to John Bruce and Lois Whetsell Scott but spent the majority of his youth in Florida where he felt most alive while on the ocean. After receiving his Bachelor of Science in Electrical Engineering from the University of Miami and his Master of Science in Engineering from the University of Florida, John enjoyed a 50+ year career in Technology. He holds three patents for digital communications technology in the implementation of a single chip transmitter/receiver and he was involved in the design and development of electronic countermeasures systems for the United States Department of Defense. John started Scott Communications Inc., which he sold to Andrew Corporation in 1987. After joining Andrew Corporation, he was responsible for creating a network products division by purchasing and managing various technology companies. Under John’s direction, Andrew Corporation was one of the first companies to link all remote locations in real time to its headquarters with an SAP enterprise system. While at Andrew Corporation, John did extensive work in both China and Russia. John was responsible for the creation of two joint ventures in China; one with The Peoples Bank of China and the other with the Nanjing Radio Company. This structure permitted the manufacturing of satellite communication equipment in Nanjing for deployment of the Peoples Bank of China across the country of China. John also managed the design and implementation of a fiber optic backbone communications system for Russia. This involved creating eight joint ventures with subway (Metro) organizations in major Russian cities, the Russian Academy of Science, the Russian Government, and the October Railway to provide digital communications through Helsinki to the major undersea cables that connect to the rest of the world. As a result of this effort, John became a member of the Russian Academy of Science. In 1995, John created a new linear power amplifier division for Andrew Corporation. These devices are used at every cell tower in the world and provide the wireless interface to mobile devices. This effort involved purchasing companies as well as internal development. The largest acquisition was Celliant which was purchased from Lucent for $500 million. John and his wife Sheryl have built and sold many homes in the Austin area, including Lakeway, Dripping Springs and Spicewood and he has been involved with Austin real estate since 1995. Lately, John was able to spend more time smelling the roses..and by roses, we mean GRANDCHILDREN and TENNIS. Affectionately known as "John John," he was adored by his grandchildren and on any Friday or Saturday night, he could be found piled up on the bed watching movies with 3 or 4 grandchildren, a few cats and his beloved dog, Carl Webster. He enjoyed many hours on and off the court at Lakecliff Racquet Club and was known as a feisty competitor with the spirit of a champion. He certainly enjoyed the occasional glass of celebratory Chardonnay and reviewing the finer points of the game with his compadres. He loved to talk about politics and real estate so you can imagine the "spirited" dinners that would take place on the patio overlooking Lake Travis. He was a very devoted husband and adored his adult children. John became a Christ follower later in life and by all accounts he was a changed man. For that, we are eternally grateful. John had a peace in his heart at the time of his death that can only be found through his faith in something greater than this life. John leaves behind his dearly beloved wife Sheryl and their children from their blended lives Suzanne Lynnet Storey and husband Peter, John Bruce Scott III, Rebecca Edralin Greenleaf and husband Bryan, Jennifer Phillips Beck and husband Monte, Trey Wilbanks Phillips and wife Laura, Chris Phillips and wife Kelley as well as his 7 grandchildren (Justin Vannort, Nicole Greenleaf, Larson and Landon Beck, Lee and Anna Phillips, and Charlotte Phillips). He also leaves behind a sister, Mary Ellen Scott of Lakeway, Texas and a host of friends. A memorial service in celebration of his life will be held Saturday, April 14, 2018 at Lakecliff Racquet Club, Spicewood at 11:00am. The family wishes to thank his Chief Medical Officer, Dr. Kelley Phillips (also the wife of his son, Chris Phillips) for her incredible guidance and care in his medical journey as well as the wonderful people at Hospice Austin and Visiting Angels for taking such great care of him at the very end. Donations in lieu of flowers can be made to the Austin Athletic Scholarship Foundation (AASF): AASF c/o John Scott Scholarship Fund 3801 N Capital of Texas Hwy E240-161 Austin, TX 78746

John Bruce Scott II passed away peacefully on Saturday, March 17th, 2018 at his beloved home in Spicewood, Texas after waging a very courageous battle against lung cancer. He was surrounded by his loving wife, Sheryl as well as several devoted... View Obituary & Service Information

The family of John Bruce Scott II created this Life Tributes page to make it easy to share your memories.