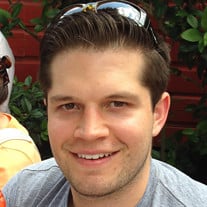 Jonathan Ross King, 27, passed away unexpectedly Friday, August 21, 2015, in Austin. A memorial and celebration service will be held at 2:00 PM on Saturday, August 29, at First Baptist Church of Woodway in Waco. Rev. Terry Graham and Rev. Bob Johns will be officiating. Jonathan was born November 23, 1987, in Waco, TX, to Debbie Brown King and Jim King. He graduated from Midway High School in Waco in 2006. At Midway, Jonathan received All-District honor in baseball and was voted Senior Class Favorite, among other awards. He received his B.B.A. with a major in Economics and a minor in International Business from the University of Mary Hardin-Baylor in 2010. While at UMHB, Jonathan served as a statistics tutor in the Center for Academic Excellence, was an officer in Omicron Delta Epsilon (The International Honor Society for Economics), played varsity baseball and was a student representative on the Campus Activities Board. Jonathan was a member of First Baptist Church of Woodway while he was in Waco. He was very involved in youth activities while at FBCW and served in Tees Valley, England, with the youth group during the summer of 2006. He attended Gateway Church after moving to Austin. Jonathan was a live-in volunteer at the World Hunger Relief, Inc., farm in Elm Mott, TX, before moving to Austin. In Austin, he worked as a Financial Analyst for CMC-Americas (Tata Consulting-Bloomberg LP), a Payroll Accountant for CSC, a Supply Chain Analyst for Dell, and a Sales Recruiter for Yodle. One of Jonathan’s true joys was international travel. In addition to England, Jonathan was able to join other UMHB students in traveling to other countries to study culture and business and to help small enterprises, including many faith-based enterprises, making a difference in economic development. Among the countries to which he traveled are Morocco, China, Costa Rica, Peru, Spain and France. Friends and family remember Jonathan for his ever-present smile, his gentle soul, his loving heart and his equal embrace of everyone he ever met. Jonathan never failed to make friends and influence people wherever he went. Jonathan was preceded in death by his paternal grandparents, James and Betty King. Jonathan is survived by his mother and father, brother Justin King and wife Kelly, sister Ashlee King Gregg and husband Aaron, nephew Colin King, nieces Emilee Gregg and Farah King, maternal grandparents Al and Irma Brown and many loving aunts, uncles, and cousins. Jonathan loved his time at the World Hunger Relief, Inc., farm. He was keenly interested in all efforts to alleviate poverty and hunger around the world. In lieu of flowers, all memorials may be made to World Hunger Relief, Inc., in Elm Mott, TX (worldhungerrelief.org). We miss Jonathan very much, but we rejoice in knowing he is in the Presence of his Lord and Savior

Jonathan Ross King, 27, passed away unexpectedly Friday, August 21, 2015, in Austin. A memorial and celebration service will be held at 2:00 PM on Saturday, August 29, at First Baptist Church of Woodway in Waco. Rev. Terry Graham and Rev.... View Obituary & Service Information

The family of Jonathan Ross King created this Life Tributes page to make it easy to share your memories.

Send flowers to the King family.