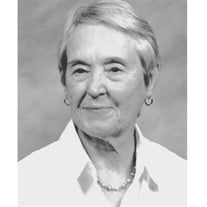 Joni Catherine Bundy Mast, died peacefully in her sleep on June 30, 2016, at the Arbor at Westminster Health Center in Austin, TX. She was 100 years and 6 months, the last of her generation in her extended family. A descendant of Scottish immigrants to America and early Texas pioneers, Joni was the daughter of Dr. Orville Taylor Bundy and Alice Smylie Bundy and granddaughter of John and Mattie Smylie, original ranchers in the Texas Panhandle. Parts of the homestead are now in Caprock Canyons State Park. Joni grew up in Silverton, TX, close to the Caprock and spent her summers at the ranch, riding horses with her sister Christine over the 18-section ranch. In the 1930s, she and Christine joined Texas artist Frank Reaugh’s painting group in evenings around their campfire. Joni moved to Lubbock when in high school and met Clarence S. Mast Jr., who was smitten from the beginning by this green-eyed, freckled brunette. Both graduated from Lubbock High School and Texas Technological College, where Joni received a B.A. degree in commercial art and a teaching certificate. She taught Texas history and English at a Plainview junior high for two years while Clarence began training at Johns Hopkins Medical School in Baltimore, MD. They married in 1940 and lived in Baltimore, then in Rochester, NY, during his internship, and then back in Lubbock after World War II. In 1950 they moved to Midland, where Clarence and his Hopkins-trained physician brothers John and Henrie together started the Mast Clinic across from Midland Memorial Hospital. Joni stayed home to care for their four children while enjoying artistic hobbies of sewing, embroidery, knitting, crocheting, painting, and cooking. She also spent countless hours volunteering at the schools, church, and hospital. She enjoyed playing bridge, gardening, reading, and travelling. In later years she made quilts and crocheted beautiful Afghans that are treasured by her family. Clarence and Joni moved to Jackson, MS, in 1972, where he was chairman of OB-GYN at the University of Mississippi Medical School. They returned to their beloved West Texas, where he served from its founding as associate dean of the Texas Tech Medical School in Amarillo and assistant chairman of the Department of Obstetrics and Gynecology. After Clarence died in 1996, Joni’s daughter Sue Mast Barker of El Paso moved to Amarillo to live with and care for her. Sue died of a sudden illness in 2000. In 2003 Joni moved to Westminster Manor in Austin to be near her daughter Christine Gilbert. The family is grateful for the wonderful care Joni received at the Westminster Manor Health Care Center. She amused staff with stories of her family and riding her pony on the ranch. A faithful, lifelong Presbyterian, Joni practiced what is preached, was always kind, tolerant, nonjudgmental and generous. One of her mottos was “If you can’t say something nice, don’t say anything at all.” Despite dementia and failing health, she was a role model for how to age gracefully and will be long remembered by many who loved her gentle spirit. Joni Mast is survived by Christine Gilbert of Austin, TX, Larry B. Mast of Tularosa, NM, Roy T. Mast of Bastrop, TX, many nieces and nephews, 10 grandchildren and 11 great-grandchildren.

Joni Catherine Bundy Mast, died peacefully in her sleep on June 30, 2016, at the Arbor at Westminster Health Center in Austin, TX. She was 100 years and 6 months, the last of her generation in her extended family. A descendant of Scottish immigrants... View Obituary & Service Information

The family of Joni Catherine Mast created this Life Tributes page to make it easy to share your memories.

Send flowers to the Mast family.