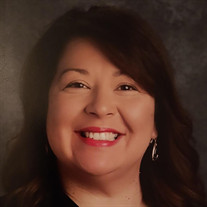 Katherine Peña Kent “Kathie”, 46, of Austin passed away on December 24th, 2020 at home surrounded by loved ones after a valiant battle with cancer. She was born August 16th, 1974, in Houston, Texas. In 2004, Kathie married Anthony Kent in Austin, Texas. She most recently worked at Brentwood Christian School where her children attend. She did volunteer work and was on staff at various churches including The Worship Center (Houston) and Glad Tidings (Austin). Kathie graduated from Sam Houston High School in Houston, Texas (1992), and attended the University of Houston where she studied Political Science and participated with Kappa Delta Chi. She later attended and graduated from the Master’s Commission of Houston (1996-1997) (Ministry Internship Program). In 1997, she joined the staff of Master’s Commission of Austin at the Church of Glad Tidings where she remained on staff for nearly 10 years. When her children reached school age, she focused much of her time and energy on their home-school education. She was well versed in Classical Conversations (a program that trains parents in Classical Christian Education). She eventually became a Director of Classical Conversations locally. She is survived by her husband Anthony Kent; children Andrew, Emma, and Alexander; parents Richard and Beatrice Peña; brother Jonathan Peña (Elizabeth); sister Stephanie Peña; parents-in-law Jim and Mary Ann Wilson, father-in-law Michael Kent; brothers and sisters-in-law Brandon Kent (Kara), Meg Johnson (Noel), Jennifer Gerber (Mark), and Byron Frost. Kathie is also survived by her nephews Matthew Peña, Kyle Gerber, Jon David Peña, Nathan Peña, Brady Johnson, Camren Kent, Garrett Kent; and nieces Maris Frost, Avery Gerber, Taylor Johnson, and Alexa Peña. She was preceded in death by her grandparents Johnny and Juanita Peña, Natividad and Fermina Carrera; uncles Ernesto and Emeterio Vega, aunt Delia Vega; and cousins Lee and Michael Vega. Out of an abundance of caution due to the rapid increase of positive COVID cases in the area, the family has made the difficult decision to restrict the in-person funeral services to family only. Others are encouraged to honor the life and legacy of Kathie Kent, by using this link (https://youtu.be/ka9VHLlnQ2o) to join us online at 11:00am on Saturday, January 2nd. Interment will occur at Merrilltown Cemetery on 14901 Burnet Rd, Austin, TX 78728. Memorials may be made to the Kent Educational Fund via Zelle ([email protected]).

The family of Katherine Pena Kent created this Life Tributes page to make it easy to share your memories.