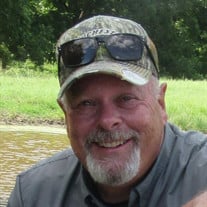 Kevin E. Newton February 13, 1952 - October 30, 2019 “Husband - Father - Soldier - Texan” Kevin went home to our loving Father on Wednesday, October 30, 2019, while surrounded by his wife and sons who loved him, joined in prayer. His spirit is now united with God and he is reaping the heavenly rewards for a life nobly lived. Kevin was born in Silver Creek, NY to Reverdy & Rosemary. A proud American, Texan, and Army veteran; he is survived by his wife, Michelle (Shelly); his 3 sons: Matthew (Christina), Christian, and Payton; and his beloved dogs: Gunner and Cooper. Kevin battled cancer with admirable courage and perseverance, inspired by former Navy Seal Marcus Luttrell to not give up. He was determined to get better and continue living for his family until the very end. Kevin graduated from Virginia Military Institute in 1974 with a degree in Literature. After six years in the Army, Kevin departed as a senior captain to pursue other interests. He was a proud member of the First Armored Division who spent most of his time as an armor officer overseas in Germany. Kevin’s life changed when he met the love of his life: Shelly. Their love story resulted in three children: Matthew, Christian, and Payton. He raised them to be men of honor. He possessed an ability to maintain composure while being so loving and protective of his three sons. They always knew how much they were loved and how proud he was of them. He was the team photographer during each of their athletic careers, but also ended up being a motivational coach to young men needing a kind word or a nod of assurance. Kevin’s approach spread to many of his son’s friends and many considered him a father figure. Kevin enjoyed guns and self-defense, fishing and hunting, and spending time with friends and family. Once he moved to Texas, he became an avid feral hog hunter and spent many hours in the blind on his property. Kevin loved being a rancher and enjoyed being around his herd of cattle. He would often call to his “ole cows!” and would smile at you when they would respond to him. However, nothing could take the place of his beloved dogs Cooper and Gunner. Kevin, like his father Reverdy, also enjoyed the many birds that came to visit because of the beautiful birdhouses he had placed throughout the yard. Sitting on the back porch he would always take a moment to point out such a bird to you, so you could admire it together. Kevin had many friends and valued them deeply. He loved to share a drink with visitors and also enjoyed bantering with some of his buddies through email or text. He was often the center of attention with his witty humor and the occasional outrageous joke. His genuine nature was respected and loved by all. These friendships and their importance were evident in his final days. He cherished his relationship with God and the Caldwell County Cowboy Church. The Lord was always with him and later in his life he began to treasure that walk. His wife and boys look forward to the day where we will all be reunited again in God’s warm embrace. If inclined, in lieu of sending flowers to mourn Kevin we ask that donations be made to some of his favorite charities: St Joseph Indian School, Dale Volunteer Fire Department or Caldwell County Cowboy Church. Kevin loved life. Share that love with others. A memorial service is planned for December 7th, 2019 at P-N Ranch. The memorial service is 2:00 p.m at the ranch with BBQ and potluck to follow. "So live your life that the fear of death can never enter your heart. Trouble no one about their religion; respect others in their view, and Demand that they respect yours. Love your life, perfect your life, Beautify all things in your life. Seek to make your life long and Its purpose in the service of your people. Prepare a noble death song for the day when you go over the great divide. Always give a word or sign of salute when meeting or passing a friend, Even a stranger, when in a lonely place. Show respect to all people and Bow to none. When you arise in the morning, give thanks for the food and For the joy of living. If you see no reason for giving thanks, The fault lies only in yourself. Abuse no one and nothing, For abuse turns the wise ones to fools and robs the spirit of its vision. When it comes your time to die, be not like those whose hearts Are filled with fear of death, so that when their time comes They weep and pray for a little more time to live their lives over again In a different way. Sing your death song and die like a hero going home." -Chief Tecumseh

The family of Kevin E. Newton created this Life Tributes page to make it easy to share your memories.

Send flowers to the Newton family.