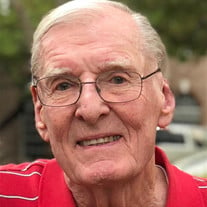 Lawrence Jack Hall, 83, passed away on October 1, 2019, in Cedar Park, Texas after an extended battle with cancer in his neck and head. He was born on November 14, 1935, in Vallejo, California to Herbert Rogers Hall and Alice Floyd “Bobbie” Jordan Hall. They moved with Larry and his two younger sisters to Millbrae, California in 1942. Larry was on the cheer team in high school and graduated from Burlingame High School in 1953. Larry was a member of the 1957 class at Stanford University and graduated with a Bachelor of Humanities and Sciences degree with a major in history and a minor in economics. He belonged to the Alpha Sigma Phi fraternity. Larry was drafted during his senior year in college. He joined the U.S. Navy, was sent to Officer Candidate School, and became a Naval Aviator. During his nine years of active duty, he flew the A-3 Skywarrior in Squadron VAH-1, the A-4 Skyhawk in Squadron VAH-3, and the supersonic RA-5C Vigilante in Squadron RVH-5. He had over 800 landings on the aircraft carriers USS Independence, USS Kitty Hawk, and USS America. He received the National Defense Medal, the Armed Forces Expeditionary Medal, the Republic of Vietnam Campaign Ribbon, the NATO Shield (SACLANT), and the Commanding Officer’s Star. In January 1968, Larry went to work for Trans World Airlines as a pilot, flying domestically and internationally. He spent part of his career as a trainer, training new pilots using sophisticated flight simulators. He was also sent to train pilots for six months in Jeddah, Saudi Arabia, and for one month in Athens, Greece. He retired as a Navy Captain in 1987 after 16 years of service in the Naval Reserves. He flew as a Captain for TWA and retired in 1998 after over 30 years as a commercial airline pilot. Larry met his wife Nancy Ann Thompson when she was visiting her brother John Hunt in Pensacola. John introduced her to his friend and fellow Navy pilot, Lieutenant Lawrence J. Hall, and in the fall of 1962 they were engaged. They were married in Geneva, Illinois on March 30, 1963. During their first year of marriage, Nancy followed Larry and the aircraft carrier USS Kitty Hawk around the Far East for nine months. Their son Randy was born in Sanford, Florida. Three years later, when Larry began his civilian career as a pilot for TWA, the family settled in Kansas City, Missouri where their daughter Karen was born. They lived in Kansas City for 26 years, then moved to the Austin, Texas area in 1994. Larry and Nancy were married for almost 45 years before her death from cancer on February 5, 2008. Larry had a lifelong love of travel, and traveled extensively around the globe throughout his life, exploring as much of the world as he could. He enjoyed going to see musical theater and later became interested in opera after watching his daughter sing in operas at UT-Austin. He adored his two granddaughters Cally and Lexi and loved watching them perform in their dance recitals and enjoyed taking them to see the Broadway tours that performed in Austin. Larry got involved with the Osher Lifelong Learning Institute (OLLI) Quest at UT-Austin in 2001, and became passionate about continuing education. He was a member of the membership, social, and curriculum committees, was the Membership Chairman 2009-2011, and served as the Chair of UT OLLI Quest 2016-2017. He led an opera special interest group for Quest and sent out a newsletter each month outlining the upcoming presentation of the Metropolitan Opera Live in HD in local movie theaters. He was always a very social person, belonging to many groups that met weekly or monthly for breakfast, dinner, wine, theater, and more. Larry truly valued his many friends. For his 80th birthday, Larry found a group that had a Vietnam-era TA-4 Skyhawk, which is the two-seater “trainer” version of the A-4 Skyhawk he had flown over 50 years earlier. He was proud that he could still fit into his Navy flight suit, and accompanied by another pilot, he flew the plane and made 10 touch-and-go landings (required training for aircraft carrier pilots) and had a wonderful time. For his 60th college reunion Larry wrote, “My friends, getting old doesn’t mean it’s over; we have much more life to live and we should live it to the fullest.” Larry loved his family and wrote that he hoped that “they can have as great a life with a loving family as I have been blessed to have.” Larry is survived by his son, Randall Lawrence Hall, daughter-in-law Dianne Calcote Hall, and granddaughters Callysta Jordan Hall and Alexa Grace Hall of Cedar Park, Texas; daughter, Karen Elizabeth Thomson Hall and son-in-law Colin Thomson of Richmond, California; sister Lorelle Hall Sharp of Napa, California; and sister, Lynette Hall Bensen and her husband, Thomas Bensen of St. Helena, California. Also very important to Larry were his many cousins, nieces, nephews, grandnieces, grandnephews, and friends. A service celebrating Larry’s life will be held at Bethany United Methodist Church (10010 Anderson Mill Rd, Austin) on Wednesday, October 23rd at 1:00 p.m. The eulogy will be given by Larry’s longtime friend Reverend Carolyn Jordan. The family would like to thank all of Larry’s numerous medical providers over the years including St. David’s Round Rock Medical Center, Texas Oncology-Round Rock, and Hospice Austin. In lieu of flowers, donations can be made to the Naval Aviation Museum Foundation (navalaviationfoundation.org), the UT Quest Excellence Fund (olli.utexas.edu/giving), or the charity of your choice. If you would like to share a remembrance or story about Larry with the family, you may do so by emailing [email protected] Larry will be dearly missed by all those whose lives he touched.

Lawrence Jack Hall, 83, passed away on October 1, 2019, in Cedar Park, Texas after an extended battle with cancer in his neck and head. He was born on November 14, 1935, in Vallejo, California to Herbert Rogers Hall and Alice Floyd &#8220;Bobbie&#8221;... View Obituary & Service Information

The family of Lawrence Hall created this Life Tributes page to make it easy to share your memories.

Send flowers to the Hall family.