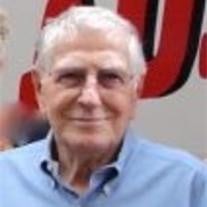 Lawrence P. Koren September 18, 1923-June 12, 2013 Lawrence P. Koren, retired Army Officer, passed away on June 12,2013. He loved to discuss business issues and politics and was a fan of polka music and dancing. He loved spending time with his kids horse back riding, and making apple pancakes for his family on Sundays. He enjoyed reminiscing about the old days. After Lawrence?s graduation from the State University College at Cobleskill, N.Y. with a degree in agriculture, he was drafted into the U.S. Army where he spent 26 years and retired as Chief Warrant Officer. He served at the end of WW II, Korean War and Viet Nam. He travelled all over the world while in the Army and afterwards. He then graduated from Texas University with a bachelors degree in business administration. Lawrence was born to Frank Koren and Antonia Sustarsis in E. Worcester, N.Y. He is survived by his daughters Maureen Manring and her husband Arthur, Lauretta England and her husband Bruce, and son Lawrence G. Koren and his wife Maria. His oldest child Jeannie Koren predeceased him. He is also survived by seven grandchildren, Onesimo Guerrero, Tommy Cordova, Taylor Manring, Maddox England, Dahlton England, Justice Koren, and Carson Koren as well as two great grandchildren, Christopher Cordova and Lilly Guerrero. All of his siblings predeceased him: Frank Koren, Stanley Koren, Helen Koren Milovic, and Jennie Koren Mahar, all from New York State. He was also blessed with many nephews and nieces.

The family of Lawrence Koren created this Life Tributes page to make it easy to share your memories.

Send flowers to the Koren family.