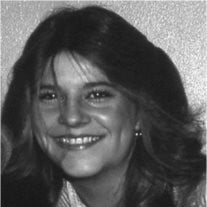 Linda Jean Hugg, 50, of Austin, Texas passed into the loving arms of Jesus on Thursday March 27, 2014 after her long and courageous battle against the ravages of scleroderma. Her death at her apartment home was attended by Bobby (brother) and Cindy Hugg, Jo Ann (sister) and Don Strickland, James (brother) and Susan Hugg, Joyce Fields (closest friend and caregiver), Conner Strickland (nephew), and her nurses from Hospice Compassus. Linda was born in Oklahoma City on August 27, 1963 as the fifth and last child of James William and Emily Jo (Boyd) Hugg. She was noted for dancing, gymnastics, and a feisty, adventurous spirit. As evidence of her strong self-determination, she graduated a year early at the age of 16 from Northwest Classen High School in Oklahoma City. She earned a Bachelor of Arts degree from Central State University in Edmond, Oklahoma and then completed special training in drug and alcohol abuse counseling. Linda moved to Austin, Texas in 1985 and worked for the State of Texas as a welfare compliance inspector. She was married from 1999 to 2001 to Darren Ivey. Linda was diagnosed with scleroderma in 2000 after suffering painful symptoms for several years. The disease progressively ravaged her body and caused amputations of her feet and lower legs, several fingers, and loss of her teeth. She was unable to work and virtually confined to her apartment for the past decade. Her faithful dog, Lucy, has been a constant companion for almost 15 years. Joyce Fields became her live-in caregiver and closest friend for the past five years. She was especially thankful for her devoted pain management physician, Dr. Robert Wills of Austin. One of Linda’s regrets was that she was unable to bear and raise children because of her disease. Linda was extraordinarily compassionate; she befriended and helped a myriad of folks, especially those who are often ignored by the rest of society. Linda was greeted upon her arrival in heaven by immediate family who preceded her in death: James William Hugg Sr. (father, 1970), Emily Jo Hugg Holmberg (mother, 2010), and Richard Boyd Hugg (brother, 1996). She is survived in this earthly life by Dr. James Hugg, Jr. (brother, Simi Valley, California), Jo Ann Strickland (sister, Austin, Texas), Bobby Hugg (brother, Kearney, Nebraska) and their spouses Susan Hugg, Don Strickland, and Cindy Hugg; her nephews and nieces: Ben Strickland (Eugene, Oregon), Conner and Abbi Strickland (Austin, Texas), Elishua and Samuel Hugg (Simi Valley, California); and numerous aunts, uncles, and cousins. Linda’s Celebration of Life service is scheduled for Monday March 31, 2014 at 11 am at Bethany United Methodist Church, 10010 Anderson Mill Rd, Austin, TX 78750. The family requests that, in lieu of flowers, tributes in Linda’s name should be donated to the Scleroderma Research Foundation (www.SRFcure.org, 800-441-2873). At her request, Linda’s earthly body will be cremated and her ashes scattered privately by her family at some later date

Linda Jean Hugg, 50, of Austin, Texas passed into the loving arms of Jesus on Thursday March 27, 2014 after her long and courageous battle against the ravages of scleroderma. Her death at her apartment home was attended by Bobby (brother) and... View Obituary & Service Information

The family of Linda Jean Hugg created this Life Tributes page to make it easy to share your memories.

Linda Jean Hugg, 50, of Austin, Texas passed into the loving...

Send flowers to the Hugg family.