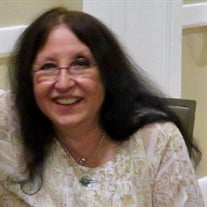 Lorraine J. Michalczyk January 16, 1953 - September 15, 2021 After a short illness, Lori Michalczyk passed away peacefully with her family by her side, on Wednesday, Sept.15th, 2021 in Belton, Texas. To say that Lori enjoyed life would be an understatement. She brought joy to whomever she met, and her laughter was infectious. Lori could light up a room just by entering it, and smiling. Her generosity was legendary, and she would help anyone who knew her which made a indelible mark on everyone she came across. Lori lived life on her own terms and filled each day with her positive energy and light. Lori loved her son Chris, her partner Rod, her family, The New York Giants, crystals, and the band “Bubble Puppy”. After graduating from Mt. St. Mary Academy in Newburgh, and Dutchess Community College, in Poughkeepsie, NY, Lori embarked on career opportunities in retailing, and later, the electrical contracting and accounting fields. She was a display artist for Caldor’s Department Store when stores displayed their merchandise to the public. Lori also worked as a Office Manager for Napp Electric Contractor Co., Inc., and was a member of IBEW Local 363. Later, she worked as an accountant assistant to Louis B. Fox CPA PC, of Suffern, NY, before embarking on her journey to Texas to help manage “Bubble Puppy”, a late 60's Rock and Roll Hall of Fame Band. She was best known for being the "Team Mom" or "Ma" throughout her son's youth football and baseball teams for Minisink Valley School District in Slate Hill, NY. She was a member of the Minisink Valley Football Booster Club and helped with coordinating the installation of the first ever football lights on the Minisink Valley Football Field in 1993 for all the young athletes to dream of playing under the Friday Night Lights. Lori had devoted her spare time and spent endless hours of filming all of her son's football games and for the Minisink Valley Warriors Varisity football program on the sidelines from 1991 to 2000, never missing a game, making her infamous Minisink Rocks music highlight films with using her video editing equipment and computer graphics on VHS to share all the unforgetable memories with everyone. All while being the best Mother, a son could ever have, a unbreakable bond like no other. It was in Texas that her creative abilities were fully utilized by not only helping arrange the Band’s gigs, but by also creating all of their merchandise, show posters and publicity. She photographed every show, as well as videotaping each performance. A logistics master, she was a road manager without par. She took good care of her boys. Her crowning achievement was the Puppy website ( http://www.bubblepuppy.com ) which she created, and managed since it's inception in 2000. She was an integral member and a great support to the band, and to their following. This is evidenced by the hundreds of best wishes, and later, condolences, she received from friends and fans when they learned of her illness. Her joys were varied and included writing historical fiction (novels and short stories), reading, photography, tarot cards, teaching, the internet, baking, decorating, season ticket holder for the New York Football Giants, going to concerts, feeding the deer that would arrive at her doorstep, and most of all, sharing Christmas with her family. But most of her time was devoted to making others happy. Lori is survived by her son Chris Michalczyk, her partner Rod Prince, her sister Ellen Crimmins, her niece Meghan Young, her nephew Sean Crimmins and their spouses. She is predeceased by her son Michael, and her parents Eleanor and Joseph Perreca of Newburgh, NY. A Family Memorial Service will be held in both Texas, and in New York State at a later date.

Lorraine J. Michalczyk January 16, 1953 - September 15, 2021 After a short illness, Lori Michalczyk passed away peacefully with her family by her side, on Wednesday, Sept.15th, 2021 in Belton, Texas. To say that Lori enjoyed life would be an... View Obituary & Service Information

The family of Lorrian Jeanne Michalczyk created this Life Tributes page to make it easy to share your memories.

Send flowers to the Michalczyk family.